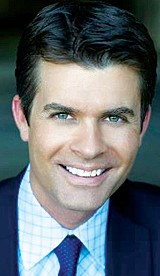 In a Facebook video, Ball said he and his girlfriend, Peyton Drew, were on stage with the country music band Big And Rich at the festival, Sunday night, Oct. 1.

After Big And Rich finished their performance, Ball said he and Peyton debated whether to follow the band or stay for the performance of Jason Aldean.

At 10:08 pm, (1:08 EST), the gunman, identified as Stephen Paddock, 64, began shooting from a room on the 32nd floor of the Mandalay Bay Resort and Casino, using either an automatic rifle or a semiautomatic weapon altered to fire like a fully-automatic.

Ball and Peyton left 48 minutes before the shooting.

As of yesterday, Tuesday, the death toll was 59. The number of people injured, either by bullets or in the rush to get away, was 527.

At the bar, Ball said the crowd was told to shelter in place, lock the doors, and not open them for anyone.

The lights and music were turned off, and TVs in the bar were all switched to news coverage of the shootings.

Ball said there was a visiting law enforcement officer in the bar, with a sidearm. He guarded the front door.

With their car parked near the Strip, which was closed by police, Ball and Peyton were invited by another couple they just met to their home.

“Strangers took us in,” he said.

Eventually, they were dropped off, and had to walk a distance to get to their car.

It was at that point they stopped to make the video.

With the Mandalay Bay Resort in the background, the two said they had not slept. Ball said he was going to get something to eat, then donate blood.

“If there are Vegas folks watching, donate. Give blood,” he said.

In the video, Ball said, “I hope people don’t turn this into a political sideshow.

“We have to remember the 58 (the death toll at the time) lives lost. It’s unfathomable.”

Ball said he lived and worked in Las Vegas for five or six years, and other than the time a snowstorm hit, he had never seen Las Vegas Boulevard so empty.

“It is literally a ghost town,” he said.

After high school, Ball joined the U.S. Air Force, where he became a combat journalist.

He worked as a reporter and anchor for several television stations throughout the country.

Information from the online version of USA Today indicates Ball is considering a run for Congress. The USA Today article said Ball sells real estate in Palm Springs and the Coachella Valley area in California.

He has a nine-year-old daughter, Avery Ilene.