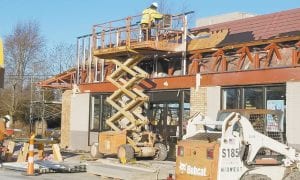 A worker on a scissors lift begins installing the framework for the new exterior of the Archbold McDonald’s.– photo by David Pugh

Jim Rivello, owner of the Archbold McDonald’s, said the restaurant is being totally rearranged, inside and out.

“The outside will be more modern. The inside– the décor is called ‘neighborhood,’ so it will be a little bit of down-home-type décor.

“The outside will be the new modern. The roofline changes… the whole thing is going to be completely different. You won’t have the roof beams that look like French fries; those will be gone.

“Out back, you’ll have a digital menu board. You won’t have the static menu boards like we have now.”

A digital menu board uses video screens to display menu options. Static boards require someone to go outside and physically change the signs behind glass doors.

“Inside, we’ll have an ordering kiosk, where you can actually go up and order right off a kiosk, go sit down, and we’ll bring the order out to you. There’s a lot of updates, with a lot to come.”

While the dining room portion of the restaurant is closed, the drive-thru lane remains open.

Rivello said he is quite surprised at how easy it has been to remain open during the construction process.

“The team has worked really hard to maintain (business). We line up (vehicles in the drive-thru), but we get them through pretty quick, and we’ve been getting some pretty good comments through our voice line.

“The customers appreciate how fast we’re getting them through.

“It’s our regulars who can’t come in, and the coffee club can’t be there, and the group in the morning.

“We’re glad to have them every day, and hopefully by the end of this month, we’ll have it all put back together.”

Rivello said the restaurant employees “want to maintain their hours” during the remodeling process.

“We’re giving them as many hours as we can, plus they’re allowed to work in any of the other seven locations that I own.

“We try. It’s the holiday season, we try to maintain what we can maintain.”

Planning started in June. Construction was supposed to start in September, “but we got backed up and backed up, so now, it’s the middle of winter,” Rivello said.

“We’re at the mercy of the weather.”

The investment is “thousands of dollars. I don’t want to give you the full amount; it would make you choke,” he said.

“It’s just another way of giving back to the community. It’s not like we’ve got to do it, but we’re doing it anyway. Basically, we just wanted to update the restaurant. We’re here for the long haul.

“I think the whole town will be happy with what we’re doing.”