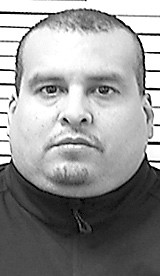 A Fulton County Grand Jury indicted Michael A. Ledesma, 49, Archbold, on a drug charge, Monday, April 15, the third time in three consecutive months Ledesma has been the subject of indictments.

The latest charge is a single count aggravated possession of drugs. The indictment alleges Ledesma was in possession of methamphetamine on Feb. 11.

In February, the grand jury indicted Ledesma on five counts: two counts of importuning, two counts of disseminating matter harmful to juveniles, and a single count of trafficking in marijuana.

The February indictment of Ledesma was not made public under a process known as a “secret indictment.”

Importuning is defined as soliciting an underage person for sex. The Ohio Revised Code states the offender must be 18 or older, the victim under 18, and there be more than four years between their ages.

The specific section of under which Ledesma was cited states the offender was communicating with the victim by telecommunication device, the victim is a law enforcement officer posing as juvenile, and offender “believes the other person is 13 years of age or older but less than 16 years of age, or is reckless in that regard.”

The importuning charges carry the specification that Ledesma was convicted of attempted rape charges in 1997 in Henry County Common Pleas Court.

The grand jury handed down five more charges against Ledesma at the end of its March session.

The charges against him were two additional counts of importuning, a single count of attempted unlawful sexual conduct with a minor, and two counts of failure to register a new address.

As a convicted sex offender, he is required to register his home and work addresses with the sheriff of the county in which he resides.

As of Thursday, April 18, Ledesma was being held at the Corrections Center of Northwest Ohio, where he has been since Feb. 11.

Eight other individuals were indicted by the grand jury:

•Charles K. Coffelt, 27, Warsaw, Ind.; indicted on one count, failure to appear on a personal recognizance bond; on or about March 26, he allegedly failed to appear for his pre-trial conference in Fulton County Common Pleas Court.

•Cole A. Cervantes, 20, Defiance; indicted on one count each, importuning, disseminating matter harmful to juveniles; on or about Feb. 4-8, allegedly solicited a person older than 13 but younger than 16 to engage in sexual conduct; allegedly furnished obscene material to a juvenile.

•Fermin Guillen, also known as Fermin Guillen Rincon, 51, Pioneer; indicted on two counts of operating a vehicle while intoxicated; on or about March 23, allegedly operated a motor vehicle while under the influence of alcohol or drugs.

•Zachary D. Oakey, 25, Petersburg, Va., indicted on two counts each, breaking and entering, receiving stolen property, one count, attempted grand theft of a motor vehicle; on or about April 7, allegedly trespassed in an unoccupied structure and allegedly attempted to steal a motor vehicle; allegedly retained a vehicle and a license plate, knowing or having reasonable cause to believe that they had been stolen.

•Conner M. Stewart, 24, Swanton; indicted on one count each, obstructing official business, assault, resisting arrest; on or about April 14, he allegedly obstructed the performance of a public official’s lawful duties; allegedly resisted in the lawful arrest of himself; allegedly attempted to cause physical harm to a police officer in the performance of his official duties.