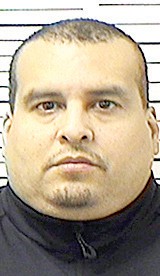 Michael Anthony Ledesma, 49, Archbold, was indicted in a five-count indictment handed down by the Fulton County grand jury, Monday, March 18.

In a press release, Scott A. Haselman, Fulton County prosecuting attorney, said Ledesma was indicted on two counts of importuning, one count of attempted unlawful sexual conduct with a minor, and two counts of failure to register a new address.

In the release, Haselman said on or about Feb. 8-9, he (Ledesma) “allegedly solicited another by means of a telecommunications device to engage in sexual activity, and the other person was a law enforcement officer posing as a person who was 13 years of age or older, but less than 16 years of age.

“On or about Feb. 11, he allegedly attempted to engage in sexual conduct with a person 13 years of age or older, but less than 16 years of age.

Fulton County Common Pleas Court records available over the Internet indicate Ledesma was also indicted on Monday, Feb. 11, on a charge of trafficking in marijuana, two counts of importuning, and two counts of disseminating matter harmful to juveniles.

As of Saturday, March 23, Ledesma was being held at the Corrections Center of Northwest Ohio.

Heather A. Boger, 40, Pettisville, was also indicted by the grand jury with a onecount indictment, charging Boger with aggravated theft.

Indictments were handed down against seven others:

•Daniel A. Mendez, 39, Lyons; indicted on two counts, aggravated possession of drugs; on or about Nov. 20, 2018, allegedly possessed methamphetamine and Fentanyl.

•Corey W. Frye, 19, Delta; indicted on one count each, failure to provide notice of a change of address, failure to register a new address, failure to periodically verify current address; on or about the month of October 2018 to Dec. 26, 2018, allegedly failed to provide a written notice of his residence address change to the Fulton County sheriff; being a convicted Tier I sex offender, allegedly failed to verify current address with the Fulton County sheriff.

•Holly C. Lowe, 35, Morenci, Mich.; indicted on one count, failure to appear on a personal recognizance bond; on or about Feb. 1, allegedly failed to appear for pre-trial conference in Fulton County Common Pleas Court.

•Roxanne M. Rupp, 36, Defiance; indicted on one count, failure to appear on a personal recognizance bond; on or about March 15, she allegedly failed to appear for her arraignment scheduled on March 15 in Fulton County Common Pleas Court.

•Curtis J. Stanley, 26, Delta; indicted on one count each, burglary, theft from a person in a protected class; on or about Jan. 28, allegedly trespassed in an occupied structure; allegedly stole property from an elderly person.