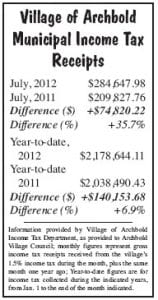 But at the Monday, Aug. 6 meeting of Archbold Village Council, Howell went so far as to say the July income tax report was good news.

In 2011, income tax collections turned around to about $3.5 million.

Howell said the latest monthly numbers are “just about back to where we were two or three years ago.”