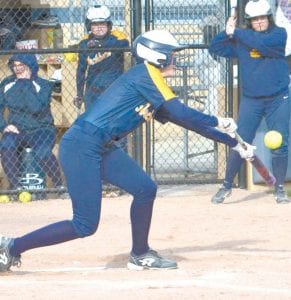 Archbold’s Emma Hall attempts to bunt the ball against Swanton, Thursday, April 11. Archbold is 12-5, 4-0 NWOAL as of April 21.– photo by Mario Gomez

Archbold sits atop the Northwest Ohio Athletic League standings at 4-0 after victories over Evergreen and Delta last week.

The Streaks also won a non-league contest over Napoleon to stand 12-5 overall.

The Vikings scored once in the bottom of the seventh but couldn’t push the tying run across as the Streaks won 3- 2, Monday, April 15, at Evergreen (7-7, 2-1 NWOAL).

Chloe Schramm got the win on the mound.

In seven innings she allowed two runs on six hits, struck out three, and walked one.

AHS had seven hits. Faith Wyse had a home run, while Madison Roth had a double and a single.

Kylie Sauder had a pair of singles, while Gabby Nafziger and Alyssa McCoy each had a base hit.

Andee Grime pitched a complete game. In seven innings she allowed five runs on seven hits, struck out four, and walked one.

The Streaks collected five hits. Sauder had a pair of base hits, while Roth, Schramm, and Mya Stuckey each had a hit.

Schram pitched a one-hitter while striking out three and walking one.

AHS had 15 hits. Sauder led the Streaks with a triple and two singles. Roth had a double with three base hits and Schramm had a double.

Wyse and Reagan Kohler each had a pair of singles; Nafziger, McCoy, and Cas sidy

Baden each had a base hit.