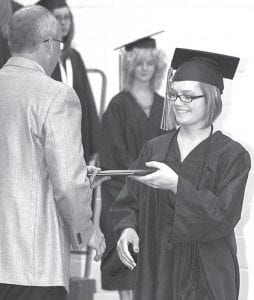 Heather Sears receives her diploma from Jon Lugbill, member of the Archbold Area School Board, during Archbold High School graduation ceremonies, Sunday, May 30. Sears was one of 96 Class of 2010 members to receive diplomas during the school’s 119th annual ceremony. – photo by David Pugh

Speaking to the graduating Class of 2010, Sunday afternoon, May 30, David Deskins, Archbold Area School District superintendent, told the audience the class is indeed a class of firsts.

In addition to being the first class to enter the Archbold Elementary School as kindergarteners, they were also the first to text message while in school, the first to have cell phones in middle school and to operate their own Internet social website pages.

And Deskins said, “One of you owes the school for the price of a new computer,” referring to an incident when a senior accidentally knocked a computer off a desk, sending it shattering to the floor.

Deskins told the graduating seniors many people had helped shape their lives, and had the class applaud parents, grandpar- ents, relatives, and others.

While they are a class of firsts, Deskins said, having a great education is not to give them a free ride in life; there is much left to do. 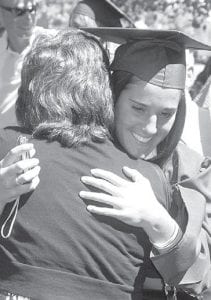 Andrea Allan hugs mom Nancy after receiving her diploma during the Archbold High School graduation ceremony, Sunday, May 30. Allan was one of 96 to graduate.–photo by David Pugh

He told class members there is an economy that needs their attention, solutions are needed for the oil spill in the Gulf of Mexico, and their help is needed in developing rapidly-advancing technology.

Deskins told members of the Class of 2010, “Don’t live your life. Live your dream.

“Go and be first– so what you leave behind will last.”

Tim Meister, AHS principal, started his job as principal of AHS on the same day the Class of 2010 became freshmen. He said on that first day, he offered a small prayer, “Please let me fool them until I figure this principal thing out.”

For his last address to the class, Meister became a teacher, reminding them of events in their lives and the lessons they taught.

John Glenn’s return to space in 1999, at the age of 77, when the class members were in first grade, taught them it’s never to late to take a chance to do great things.

The 9-11 terrorist attacks taught them several lessons, including, “You are blessed to live in the greatest country in the world. Don’t ever forget that, and most importantly, don’t ever forget in your lives to protect that.”

He also listed the examples of Bill Clinton, John Edwards, Ben Roethlisberger, and Tiger Woods. They, he said, were people who thought “the rules did not apply to them.”

There will be two people they cannot fool over questions of whether or not they’ve done the right thing– themselves, and God.

“Chase your dreams, appreciate what you have, protect it, and do the right thing.”

Jacob Nafziger, one of two class speakers, told the audience while he and his classmates had been at AHS, “without realizing it, we grew into mature young adults.”

Upperclassmen, Nafziger said, become role models and mentors to those in the lower grades. Some classes, he said, see the task as a burden rather than a privilege.

However, the Class of 2010 had done the opposite. Class members took on the responsibility, “and we see it as a privilege.”

He challenged his classmates to continue the tradition of leadership they modeled in the high school.

Kathryn Friesen talked about the dictionary definition of graduation, noting it referred to “stages and degrees.”

Friesen said a graduation also marks division, such as between the end of childhood and the beginning of adulthood.

Celebrating graduations, “no matter how big or how small, reminds us to celebrate life.

“And when we do so, we are recognizing where we come from, where we are, and most of all, where we are going.”–David Pugh