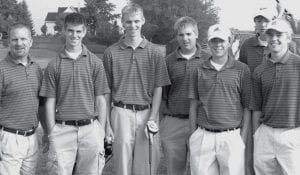 “I was hoping for a little lower score and a little lower finish, but we didn’t play well,” said Kevin Miller, coach. “It’s something new, and we had never been there. I think they felt pretty good about their game.”

Individually, Stryker’s Zack Erb qualified with a score of 76.

“We would’ve had to play the round of our life to come out, the way those other teams played,” said Miller.

“I’m proud of them,” said Miller. “I know they did their best. I know that some wish they had done better, but they did a nice job.

“We needed four strokes off of everybody’s score and I’d have been really pleased.

“The greens were pretty fast. I don’t know that the greens caused them that much trouble; I think they got into trouble with water and out-of-bounds. Par 3s hurt a few.”

The team teed off with Minster, who finished fifth, and Mansfield St. Peter, who was eighth.

“I think playing with better teams most of the time helps us,” said Miller.

“Hopefully we get the chance to do it again. We know what to expect next year if this works out again. We lose one senior (Micah Grime), so hopefully we’ll be solid and competitive again next year.