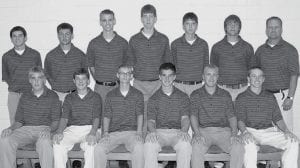 The Streaks fell two strokes shy of tying Kalida for the championship. The Wildcats finished with a team score of 316; the Blue Streaks shot a 318. Delphos St. John’s was third with 322.

“We knew we were in the hunt, but had to wait for the last group off the back nine to figure out for sure,” said Kevin Miller, AHS coach. “We even had a shot at being first, and it was the last golfer for Kalida that determined it.

“If he would’ve come in two strokes less we would’ve tied them.”

“This is a great group of guys,” said Miller. “This has to be one of the best complete teams, because they’re all pretty solid golfers. Of the five, any of them can get in the 30s (on nine holes) every so often.

“Steven Kinsman definitely has been playing the best; he is definitely our number one in playing very solidly all year.

“I’m excited for the guys. They knew at the beginning of the season that we were dropping divisions, they knew we were going to be more competitive, and they’ve just been working at that throughout the season.

“A lot of them played in tournaments over the summer, and it’s paid off.”

It will be the tenth time in AHS history the golf team has played in district competition.

“I’m going to tell them let’s just go and have fun,” said Miller. “They always do the best they can. I want them to try and stay relaxed and just have fun and enjoy it.”