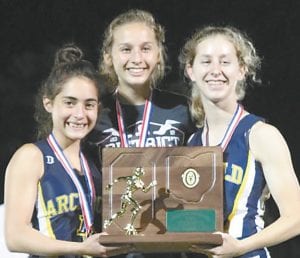 Five first places– including three relays– and one third led the Archbold girls track team to a Division III regional track and field championship, Wednesday and Friday, May 22 and 24, at Tiffin.

The Streaks won the girls team championship with 56 points. Columbus Grove was second with 50, while Margaretta was third with 48.

There were 40 teams in the girls meet.

“That just doesn’t happen. That was amazing.”

The top four finishers in each event advance to the state tournament, Friday and Saturday, May 31-June 1, in Columbus.

Running Their Way To State 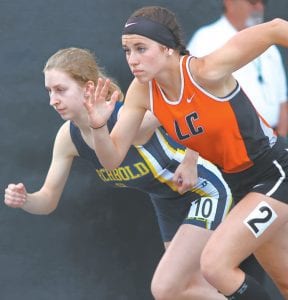 Gwynne Riley, left, and Liberty Center’s Constance Roell get ready for the start of the 800 run. Riley won the event.

The AHS 4×800-meter relay team of Riley, Brittney Ramirez, Sauder, and Stamm started things off on Wednesday by defending their 2018 regional title.

The quartet ran the race in 9 minutes, 34.77 seconds, 12 seconds ahead of secondplace New London.

Finals for the rest of the running events were held on Friday.

Stamm won her third straight regional title in the 400, crossing the finish line in 56.58 seconds, a second faster than second-place Bethany Smith of Vanlue.

The AHS senior improved her time from 2018 by more than a second.

Stamm was nervous before the event, because, she said, “everyone expects her to be the winner,” D. Gladieux said. 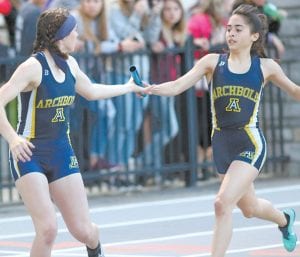 Kylie Sauder, left, takes the handoff from Iris Pena in the 4×400. Archbold won the event in meet record time.

The coach told her, “Dakota, just run what you’ve been trained to do. Just run within yourself, not against everyone else.”

The previous regional meet record of 3:59.1 was set in 2004 by Collins Western Reserve.

“At the 200 mark on Gwynne’s lap, the girl from Liberty-Benton was coming up close behind her, and it was like, Gwynne just looked at her and said, ‘Not today,’ and she just bolted,” said D. Gladieux. 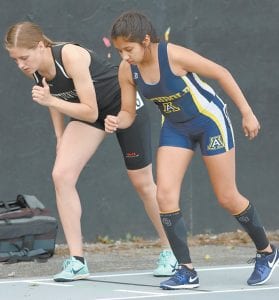 Pettisville’s Morgan Leppelmeier, left, and Archbold’s Karley Ramirez wait for the gun to start the 1600 run.

“From that point on, there was no question who had it.”

Three of the four laps were run in under 60 seconds.

Pettisville’s Morgan Leppelmeier finished eighth in the girls 1600, finishing in 5:30.06.

Pettisville’s Grace Schnitkey finished seventh in the discus with a throw of 120 feet, 7 inches, setting a school record.

Pettisville’s Graeme Jacoby finished eighth in the shot put with a throw of 49-2 1/4.

Archbold’s Shylo Richardson ran in the preliminaries but did not qualify for the finals in the girls 100-meter hurdles.

Pettisville’s Graeme Jacoby, left, concentrates as he prepares to throw the shot put. He placed eighth in the event.

Pettisville’s Calvin Nofziger ran in the preliminaries but did not qualify for the finals in the boys 110 hurdles.

The Pettisville 4×200 girls relay team of Schnitkey, Meleah Plank, Karsen Pursel, and Xavia Borden ran in the preliminaries but did not qualify for the finals.

The Pettisville 4×100 girls relay team of Schnitkey, Plank, Danielle King, and Borden ran in the preliminaries but did not qualify for the finals.

Schnitkey finished 15th in the shot put with a throw of 31-1.

Pettisville’s Ellie Wixom tied for 10th in the pole vault with a vault of 9 feet.

“This is only the second time since 2005 that we’ve not had a state qualifier, so we’ve had a great run for the last 15 years,” said Gabe Jaramillo, PHS co-head track coach.

“Although it may seem disappointing, I could not be more proud of the effort our kids gave at regionals.

“Most of our athletes set a personal record, as well as one school record set by Grace Schnitkey.

“The kids rose to the occasion and accepted the challenge that our outstanding region presented to them. Overall, we had a fantastic season, and with our youth, we can look forward to continued success in the coming years.”

Archbold boys competed in the Div. II regional meet at Piqua, Thursday and Saturday, May 23 and 25.

Trey Theobald advanced to the 400 finals after another runner was disqualified. The sophomore finished seventh in the finals in 51.29.

Theobald ran in the preliminaries but did not qualify for the finals in the boys 200-meter dash.

The boys 4×400 relay team of Tony Grime, Elijah Zimmerman, Austin Roth, and Theobald finished with the 10th-best time in the preliminaries and did not qualify for the finals.

Matthew Gladieux just missed out on a trip to state, finishing fifth in the shot put and discus.

His best throw in the discus was 149-3; Springfield Northwestern’s Korbin Spencer finished fourth with a throw of 152-9.

Mason Babcock finished 11th in the discus with a throw of 130-1.