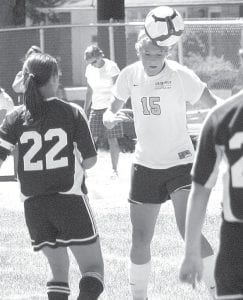 The Streaks opened the season with a 5-0 victory at Springfield High School, Tuesday, Aug. 24.

The Streaks hosted Rossford, Saturday, Aug. 28, and sent the Bulldogs home growling with a 9-0 loss.

The Streaks took a 1-0 lead when Alicia Drewes sent a pass to Lauren Kindinger, who put the ball in the back of the net.

The Bulldogs had several attempts on goal that Nichole Woods denied.

Drewes added another goal before the half to secure a 2-0 lead.

Drewes crossed a ball over to Kindinger, who scored her second goal to give Archbold a 3-0 lead.

Drewes sent a screaming ball to the back of the net to increase the lead. Rupp, King, Kassidy Garrow, and Meggie Yoder also had several attempts at the goal but were denied.

Drewes received a pass from Brie Deskins, made several moves, and punched the ball past the goalie to give the Streaks the 5-0 fi- nal score.

AHS dominated the field but seemed to have problems putting the ball into the net.

Drewes took a corner kick and passed the ball to Cassidy Wyse, who scored.

Rossford made a number of efforts to move the ball up the field but came to the steel wall of Leininger, Carley Wyse, Allison, and Nofziger leading the defense.

The Bulldogs got their paws in the way for a hand ball in the box. Drewes took the penalty kick and gave AHS a 2-0 lead going into halftime.

Drewes took another corner kick to Cassidy Wyse, who scored. Drewes then gave Archbold a 4-0 lead.

After the Streaks were awarded another corner kick, Drewes sent a high lofty ball to Kindinger, who headed the ball past the goalie. Rupp, Fidler, and King had several shots on goal that went wide, over, or were stopped by the Bulldog goalie.

Drewes gave AHS a 6-0 lead after gaining control of the ball and driving it to the back of the net.

After Leininger increased the lead to 7-0, Rossford was called for a foul in the box, giving Archbold another penalty kick.

Drewes scored, and Allison followed up a shot by Fidler to seal the 9-0 win.

Woods again stopped any attempts by the Bulldogs in goal.

Self-confidence is the first requisite to great undertakings.– Samuel Johnson