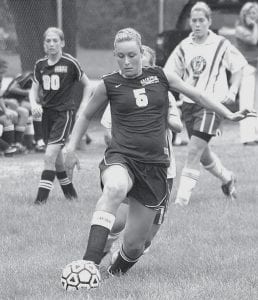 Nicole Babcock dribbles the ball up the field in Blue Streak soccer action against Springfield, Tuesday, Aug. 21. Archbold is 3-0-1 after two weeks of play.- photo by Scott Schultz

The Archbold girls soccer team won three games and tied one in its first two weeks of action.

The Streaks started the season Tuesday, Aug. 21, hosting Springfield. The first game was not an easy one, but Archbold came out on top 5-4.

In the first half, Bri Wyse scored Archbold’s first goal with the assist of Alicia Drewes. Wyse dribbled in the ball for another goal, and Jessica Ramirez also scored for a 3-2 halftime score.

At the beginning of the second half, Drewes scored to up the score to 4-2. Springfield quickly answered with a goal of its own to close the gap to 4-3.

With an assist from Drewes, Ramirez headed the ball in to give AHS a 5-3 lead. Springfield scored once more for the 5-4 fi- nal.

The Blue Streaks traveled to Rossford, Saturday, Aug. 25. Archbold fought to get its first goal. With seconds until the end of the first half, Trisha King scored, but the officials said the half was over before it went in, so the half went scoreless.

Entering the second half, Drewes dribbles into the 18- yard line and assisted Ramirez for Archbold’s first goal.

With a couple of minutes left, Rossford answered with a goal despite the hardworking defense of Graber, Leininger, and Babcock to tie the game at 1.

Archbold played another tough team, Saturday, Sept. 1, defeating Lima Bath 4-3 to up its record to 3-0-1.

In the second half, Wyse dribbled down the field to assist Ramirez, who broke the tie to take a 3-2 lead. Wyse, with the assist of Graber, scored to up the advantage to 4-2.

With less than five minutes left, Lima Bath scored its last goal for the 4-3 final.