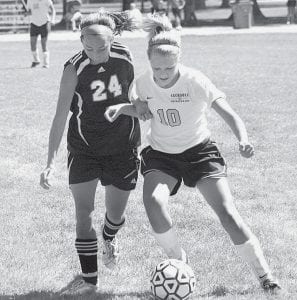 Blue Streak Carley Wyse (10) fights off an Otsego Knight to keep control of the ball. AHS beat the Knights 5-1.- photo by Scott Schultz

The Archbold soccer team improved to 5-2-1 with a win, tie, and loss last week.

The Streaks went on the road to Crestview, Saturday, Sept. 13, and came home with a 3-0 victory.

Liberty Benton took a quick lead within the first six minutes. Archbold struggled to put the tactical side of the game together. The Eagles followed with another goal for a 2-0 lead.

With about five minutes left in the game, Hannah Leininger scored on a 45-yard goal to put Archbold on the board. Jenni Beck had several defensive saves along with Carley Wyse, but Archbold could not come back.

Trisha King helped the Streaks advance early in the game with her goal. Bryan soon put the ball in the back of the net to tie the score at 1.

Alicia Drewes hit a free kick to Jessica Ramirez, who headed the ball in the net to give Archbold a 2-1 lead at halftime.

The second half was a battle of possessions. Bryan scored again to tie the game at 2, which is how the game ended.

Kelsey Moshier led the Streaks to a 1-0 start. Morgan Ducey got fouled in the box to award Drewes a penalty kick, which gave the Streaks a 2-0 lead.

Trisha King followed with a goal of her own to give AHS a 3-0 lead. The Streak defensive line played its part to hold Crestview scoreless.

Otsego grabbed an early lead with the first goal. With 20 minutes left in the first half, Archbold was given a corner kick. Drewes passed the ball to Mindy Rupp; Rupp passed it back to Drewes, who put a long shot in the back of the net.

Within the next 10 minutes, Drewes penetrated toward the goal, then passed to Ruthie Beck, who made a sliding attempt at the pass to score for a 2-1 lead.

Autumn Lantz scored in the second half, as did Drewes, who added two more goals to give her the second hat trick of the season.

Returning from injury, Kelly Hesterman helped assist the defensive line. Beck had several saves, which along with the defensive play of Wyse and Leininger, held Otsego from scoring more than the one goal.

Springfield dominated the first half 2-0. Drewes scored Archbold’s only goal, which came as a penalty kick. Wyse had several saves on defense.

Drewes dribbled through five Rossford players to score the first goal, then followed with another for a 2-0 halftime lead. Archbold out-shot the Bulldogs 16-4 in the first half.

The Streaks’ defensive line, led by Beck, Paige Stamm, Wyse, Leininger, and Lantz helped seal the victory in the second half.

A long goal by Drewes tied the score, and Jessica Ramirez followed with two goals with an assist by Autumn Lantz. Drewes ended the first half with another for a 4-1 lead.

The second half was total dominance by the AHS defense. Beck’s saves, along with the defensive play of Stamm, Leininger, Wyse, Drewes, and Ramirez, stopped the Wildcats from scoring in the second half.

Trisha King added the final goal with an assist from Lantz.

Fresh off the injured list, Moshier dominated the field with the first hat trick of the season. Archbold led 3-0 at halftime.

Lima Bath came back with two goals in the second half.

With 15 seconds left, Sierra Nofziger won the ball and proceeded to penetrate the field when she collided with two Bath players. The ambulance was called and the captains of both teams decided to call the game with only 12 seconds left.