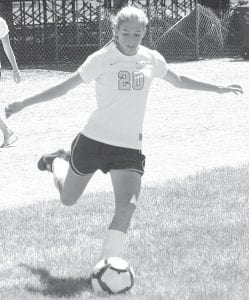 The Archbold girls soccer team outscored its opponents 13-0 last week to improve to 4-0.

Throughout the first four games the Streaks have not allowed their opponents to score a single goal.

AHS traveled to Napoleon Tuesday, Aug. 31, and defeated the Wildcats 8-0.

The Streaks were back on the road, Saturday, Sept. 4. AHS defeated Lima Bath 5- 0.

The Streaks had a sluggish start for the first 10 minutes.

Alicia Drewes gained control of the ball, made several moves, and passed the ball to Trisha King, who scored.

About five minutes later, Drewes dribbled up the sideline toward the net when the defense fouled her. Drewes took the penalty kick and placed it in the corner of the net.

The Wildcats tried to get the ball toward the goal but came up against Hannah Leininger, Hanna Allison, Carley Wyse, and Sierra Nofziger. With 10 minutes left in the half, Drewes dribbled to the end line and sent a pass to Jesse Fidler, who upped the score to 3-0.

Drewes took the ball down the center of the field and scored to start the second half. She scored twice more before heading back to defense.

Fidler scored Archbold’s seventh goal. With about six minutes left, Carley Wyse took a free kick from a Wildcat foul and scored to seal the 8-0 win.

Nichole Wood and Megan Arend made several saves to insure a shutout.

The midfield of King, Fidler, Cassidy Wyse, Mindy Rupp, and Lauren Kindinger helped stop the Wildcats’ attacks and push the ball to Drewes in forward, who gave AHS a 3-0 halftime lead.

The Streaks were determined to seal the win with no goals scored against them. Rupp increased the lead to 4- 0, and Drewes dribbled down the field to make her fourth goal of the game.