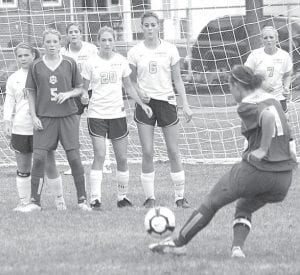 The Streaks hosted Continental, Tuesday, Sept. 28, and defeated the Pirates 5-3.

The Blue and Gold traveled to Kalida, Thursday, Sept. 30, and came home with a 1-0 victory.

The Streaks had some early attempts on goal but could not score.

More than half of the first half had passed when Mindy Rupp dribbled the ball down the sideline and crossed the ball to the center of the net, where Alicia Drewes bicycle kicked the ball for a 1-0 lead.

The Pirates pushed the ball up the field but the Streaks committed a foul. The Pirates sent a high lofty ball to the upper left-hand corner of the net on the free kick and a 1-1 tie at the half.

Drewes took the ball from the 50-yard line all the way to score. The Pirates got past the defense and sent a rolling ball that slipped through the Streaks to tie the game again at 2.

Lauren Kindinger had possession and was fouled in the box. Drewes took the penalty kick and scored.

After the Streaks gained a corner kick, Drewes sent a pass to Cassidy Wyse, who gave AHS a 4-2 lead. The Pirates were awarded a penalty kick and scored, to come within one, 4-3.

The Pirates fouled again to award a free kick to the Streaks. Drewes sent a line drive ball from about 30 yards to end the game with a 5-3 victory.

Archbold has a 2-0-1 record against Kalida over the last three years, but the wins were never an easy feat.

Rupp won the ball and used her speed to go past the Wildcats. She brought the ball up the side, then crossed it to the center where Drewes scored.

In the second half the Streaks had many runs toward goal, but failed to put the ball in the net. Meg Arend continued to save Kalida’s attempts to finish with the Streaks on top 1-0.