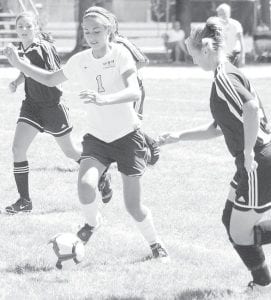 Alicia Drewes scored past goalkeeper Megan Fields for a 1-0 lead.

The Indians broke through the AHS defense to tie the game with about two minutes left in the first half.

The Streaks could not get good touches on the ball in the second half. Trisha King, Cassidy Wyse, Hanna Allison, Hannah Leininger, Sierra Nofziger, and Carley Wyse contained and stopped the Indians from going to goal.

The Streaks led 2-0 after the first two minutes. Drewes scored both goals.

The Bulldogs’ aggressive play resulted in many Streaks picking themselves off the ground. Swanton shot a ball that Megan Arend blocked; the Bulldogs rebounded and scored.

Jesse Fidler scored her first goal of the night to put the Streaks up 3-1. After Rupp broke free and scored, King sent a pass to Rupp, who dribbled to the right side of the goal and put the ball in the opposite corner.

Swanton scored to decrease the lead to 5-2. Drewes added her third goal before the half for a 6-2 lead.

Drewes dribbled and shot a pass to King, who squeaked the ball into the goal.

The Bulldogs continued to attack and sent the ball over Deskins in goal for the 7-3 final.

Archbold’s record against Lake over the last three years was 1-1-1.

The Streaks began with several attacks on goal, but all attempts fell short. Lake was quick and moved the ball down the field.

The Streaks found themselves backing up away from the ball, stabbing for the ball, and kicking the ball out the first half.

Lake put several passes together, which resulted in a goal and a 1-0 lead at the half.

The Streaks did a much better job of not stabbing at the ball in the second half, and Lake had minimal shots on goal, but Archbold suffered its first loss of the season 1-0.