Archbold Girls Improve To 14-1 With Wins Over PH, Springfield 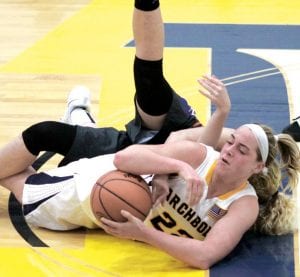 Deadlocked at 40 after regulation, the Streaks outscored Springfield 8-2 in overtime to come home with a 48-42 non-league road victory, Tuesday, Jan. 23.

“I’m proud of the effort we gave for the entire game. We hung tough and fought.

“We did an excellent job at the free-throw line, which was the difference in the game.”

The Blue Devils (9-7) led 6-4 after a slow first quarter. Both teams scored 17 points in the second period for a 23-21 Springfield lead at the half.

The Streaks closed the gap to one point, down 31-30, after three, and sent the game into overtime after tying the score at 40.

The Blue Devils committed 20 turnovers to 10 for AHS, but grabbed 35 rebounds to 18 for the Streaks. Blair Bucklew and Lily Krieger each grabbed five for AHS.

Four players scored for Archbold, and all four were in double figures. Kamryn Hostetler led AHS with 17 points. Bucklew scored 11, while Andi Peterson and Krieger each scored 10.

A trio of Blue Devils were in double figures. Reyonna Armstrong scored 13; Cierra Harris had 12; and Terra Houston-Taylor finished with 10.

The Streaks led 16-13 after a fast-paced first quarter led by Bucklew’s seven points.

PHHS scored the quarter’s final four points to go into the final eight minutes down 42-35.

The Streaks answered with 9-0 run on a pair of free throws from Krieger, a Brooke Kohler steal and Peterson layup, Krieger hitting one of two at the foul line, and four straight Bucklew foul shots for a 57-48 lead with 1:12 remaining.

Faith Frania finally broke Archbold’s run with a basket off a rebound with 1:02 on the clock.

After a pair of Hostetler free throws, Kayla Prigge hit a three-pointer for PH to close the gap to seven, 60-53.

Hostetler hit two of four free throws for a 62-53 advantage, and PH’s Katelyn Drewes hit the game’s final three with 9.8 seconds left for the 62-56 final.

“This was a nice win,” said Ziegler. “Patrick Henry played well. They kept making shots to keep them in the game.

“I thought our defensive intensity picked up in the second half. We are getting everyone’s best game right now, which is making us tested. We haven’t given in to pressure.”

Bucklew led all scorers with 20 points. Krieger scored 14 and Hostetler, 13.