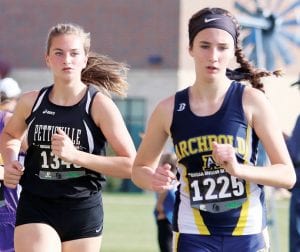 The Streaks won the team championship for the second time in school history.

The two ran away with the competition, as thirdplace Carey finished with 92 points.

The top four teams advance to the regional meet in Tiffin, Saturday, Oct. 28. The Div. III girls race is at 11 am. The top eight teams and individuals not on qualifying teams who finish in the top 32 advance to the state meet.

Pettisville senior Nichole Foor won the individual title, finishing the race in 19 minutes, 5 seconds. She finished fifth last year, second in 2015, and 10th as a freshman in 2014. 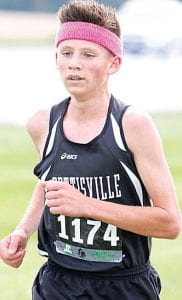 Sarah Foor was the final scoring runner for PHS, placing 19th in 21:29.

Archbold’s final scoring runner was Camryn Hudson, who was 21st in 21:54.

“For the four girls to be able to run as a group and finish together really helped the team.

“All seven of the girls ran really well! They knew the goals going in and they executed our plan very well. 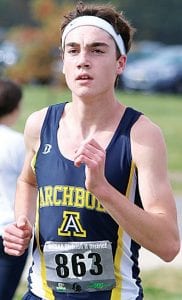 “It is exciting for these ladies to experience some things that haven’t happened for Archbold girls cross country for quite a few years!

“A district title against the competition we have to compete against is very special. Our area is tough! I’m very proud of them and looking forward to the regional meet on Saturday.”

“Elizabeth Sauder had a personal best for this year at 19:34. Most of the other girls had personal records, as well.

“Archbold, who should have had the second seed and been in District 2, just ran an incredible race. They had their pack of four girls come in right after Elizabeth Sauder in scoring.

“Last week, at the NWOAL, it was a pack of three. You have to take your hat off to them. Archbold ran a super race.”

The Pettisville boys team finished fifth in the Div. III District 2 race, one spot away from advancing to regionals.

Pettisville had a team score of 124.

Two PHS boys advanced individually by finishing in the top 16. Max Leppelmeier, a freshman, placed second in 16:37, and Logan Rufenacht, a junior, was eighth in 17:05.

“Jaret Rychener, our third runner, has been injured these past two weeks. Last week he ran well with one week off. This second week caught up to him and he was our sixth runner on Saturday, a full minute off his time.

“Max Leppelmeier, only a freshman, ran an unbelievable time of 16:37. Obviously, that is a career personal best for him.

“If he runs that time next week at regionals, he will make it to state.

“Logan Rufenacht ran a great time as well to finish eighth. His time is on the bubble, so to speak.”

The Div. III boys race is at 1:30 pm, Saturday, Oct. 28, in Tiffin. The top seven teams and 28 individuals not on qualifying teams advance to the state meet.

The Archbold boys team ran in the Div. II race at districts, and finished third with 92 points.

The top two teams and individuals finishing in the top eight not on qualifying teams advanced to the regional meet.

Eastwood won with 27 points, with its first five runners finishing in the top nine. Genoa was second with 51.

“The guys ran an exceptional race, with most of them running season bests and a few personal bests, too,” said R. Kinsman.

“They competed very well, and to finish third in a new division this year is a great accomplishment and something we will celebrate!

“I’m proud of the way they competed.