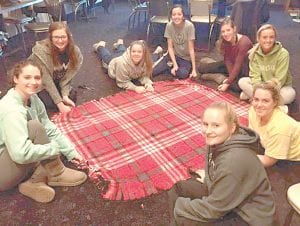 Members of the Archbold High School varsity girls basketball team make news every time they play, for their athletic ability and their skill with the ball.

Last month, they took time together off the court to give of themselves to others.

Team members gathered Sunday, Dec. 16, at Mom’s Diner, downtown Archbold, to make blankets, which were donated to the food pantry at Tru North Church, Wauseon, for eventual distribution to those in need.

Sophie Hubby, a junior on the team and a church member, said the girls “wanted to do something for team bonding, and we also wanted to help our community.”

Her mother, Lora, suggested the blankets. She talked to the other mothers “and they thought it would be a good idea,” Sophie said.

At the restaurant, a room was available. The girls pushed the tables out of the way so they could spread the blankets out on the floor.

Gabby Nafziger, a senior, said they made fleece tie blankets.

Lily Krieger, also a senior, explained the blankets are two big pieces of fleece. Fringe was cut along the edges of the two pieces, then tied together.

The hardest part of making the blankets?

“Your fingers start to cramp up,” said Naomi Rodriguez, a junior.

With eight girls working on the blankets, they were able to work on sides all at the same time.

But the girls tied the knots differently.

Hubby said it was apparent some of the blankets had a more feminine appearance, some were more masculine, “and you could tell some were for little kids. Some were smaller, some were bigger,” she said.

Making the blankets “was a good time,” Krieger said.

“It was a good time bonding, and it was going to a good cause,” Rodriguez said.

How does the experience translate into basketball?

One of the girls explained that just like on the court, they had to work together, because each was doing a different job.

“You definitely want to have a good team chemistry. That translates onto the court. Spending time with each other off the court helps with that,” Krieger said.

Will they do another project in the future?

“Now that we did it and it was a good experience, we are considering doing it again,” Hubby said.