Streaks Advance In Six Events, Blackbirds Move On In Two 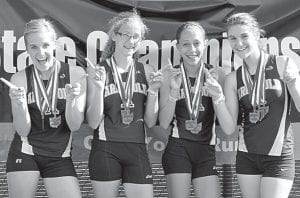 The quartet finished the race in 4 minutes, 4.09 seconds, eight seconds faster than in the district final. The Streaks crossed the finish line more than 2 1/2 seconds ahead of the team that placed second.

The AHS girls team placed fourth in the team standings with 35 points. Van Buren won with 53.

The top four finishers in each event advance to the state track & field championships, Friday, and Saturday, June 7-8, at the Jesse Owens Memorial Stadium at The Ohio State University, Columbus. 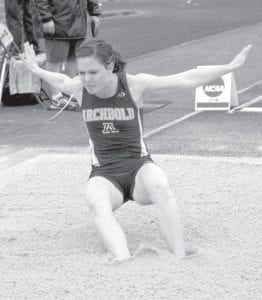 Other Regional Finalists In Top Eight

Other Archbold and Pettisville athletes who finished in the top eight in the regional finals but did not advance to state:

“This is an exciting time of the season,” said Dina Gladieux, AHS head coach.

“I am thrilled to have five different events going for the girls in Division III and Levi in the 400 for Division II.

“It’s the only time of the season when I can relax and just watch the athletes perform at their highest level.

“It was nice to see so many from the Northwest Ohio Athletic League qualify to state and qualify with top times. Northwest Ohio is well represented.”

“We had a great many personal records and two school records at regionals (Brakefield in the 110 hurdles and our 4×400 team),” said Tom Wagner, PHS head coach.

“I had told the 4×800 we needed to take off about eight seconds from districts… and they did. We ran a very fine race.

“Dominic Frey ran a fantastic race in the 1600. He was challenged for the last qualifying spot, but held tough edging out the fifthplace runner by two-tenths (0.2) of a second.

“Looking ahead to the state meet in Columbus, we will have to step up our game to the next level, but that is what makes it so exciting.”