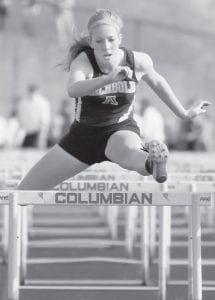 Archbold’s Lexa Richardson finishes fourth in the 100-meter hurdles at the Div. III regional track and field meet in Tiffin. Her finish qualifies her for the state meet, Friday, June 3, & Saturday, June 4, in Columbus.– photo by Dennis Driver

Archbold finished 1/2 point away from defending its Division III regional girls track and field title, Wednesday and Friday, May 25-27, at Tiffin.

Toledo Christian was third with 40, and Pettisville was fourth with 38 in the 47- team field.

The Streaks won their fourth straight regional title in the 4×400-meter relay.

Others advancing to the state meet, Friday and Saturday, June 3-4, in Columbus are Archbold’s Lexa Richardson, who finished fourth in the 100-meter hurdles; Dakota Stamm, who was second in the 400; Sydney Ranzau, who tied for third in the pole vault; and Pettisville’s A. Leppelmeier, who set a school record and placed third in the 1600 and finished second in the 3200; and Sauder, who ran a school-record time and was second in the 800.

Archbold’s Gwynne Riley runs a leg in the 4×400 at the regional meet, which the Streaks won for the fourth straight time.– photo by Dennis Driver

The top four finishers in each event advance to the state tournament.

Archbold’s Jack Fisher was the only Blue Streak to advance to the state boys meet. He finished third in the 400.

“I thought our girls gave a tremendous effort in all the events we competed in,” said Tom Wagner, PHS head coach.

“We were very pleased with our fourth place overall out of 47 teams scoring. We were only six points away from Columbus Grove, the regional champion.

“Wednesday, the distance people received a break in the weather with the overcast conditions. We ran a very nice race in the 4×800, with all of the girls running very solid splits.

“Friday was not a distance person’s dream for weather. It was about 90 degrees, sunny and humid. The black track was most likely a good ten degrees warmer, or more. 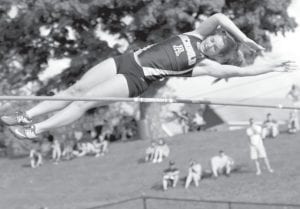 Archbold’s Sydney Ranzau clears the bar on the way to placing third in the pole vault and advancing to the state meet.– photo by Dennis Driver

“Alexa ran a great race, breaking the school record in the process.

“The heat really affected Nichole both in the 1600 and 3200. She still gave perfect effort in both races and had very decent times.

“Elizabeth Sauder ran a disciplined race in the 800. She was sort of boxed in at the start by the girls she shared the lane with.

“However, at the cut she soared ahead to run an outstanding race to finish second and break the school record.

“Alexa came back in the 3200 to run a very strong race to finish second. She then came back to run the anchor in the 4×400, which finished seventh.

“Overall, the girls showed their tremendous mental toughness and competitive spirit, and I think they had a fun time in the process.

“Last year the girls’ goal was to make it to the state meet. This year we, of course, want to run our best time by giving a perfect effort.

“The girls’ goal is to make the podium.

Pettisville’s Elizabeth Sauder, a member of the 4×800 relay that won a regional title, ran a school-record time and finished second in the 800.– photo by Dennis Driver

“We know that we will have to be ready to take it to the next level in Columbus. This window of opportunity is what they have been training for all year.

“We look forward to the fun of the competition that the state meet offers.”

“I am excited for the ones that made it out,” said Dina Gladieux, AHS head coach.

“We have four individual events that qualified and only one relay. That is out of the ordinary for us, but I am so thrilled for the ones that did make it.

“Then Emily Roth was fifth in both the long jump and 200.”

(Only top 4 finishes are listed)