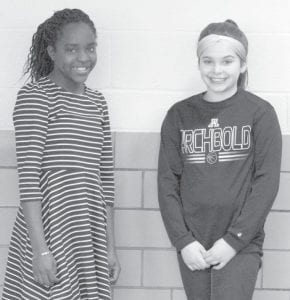 Chaina Nafziger, left, an Archbold sixth grader, has been named one of two top youth volunteers in Ohio through the Spirit of Community Awards. She lived in a Haitian orphanage before being adopted by a local couple, and held a bake sale to raise money for orphans in Haiti. Katie Stoner, right, a classmate, helped Nafziger with the project.– courtesy photo

Chaina Nafziger, an Archbold sixth grader, has been named one of the top youth volunteers in Ohio for 2018.

She is one of two students selected from Ohio for the title through The Spirit of Community Awards, which honor young people for outstanding acts of volunteerism.

Nafziger, 11, was inspired to organize a bake sale that raised $1,400 for charities that assist Orphans in Haiti.

In a press release, Nafziger, who lived in a Haitian home from the age of six until she was adopted by the David and Deb Nafziger family when she was eight, said, “I know what it is like to live in an orphanage and to not have enough food to eat every day.”

Mark Grime, a member of Archbold Evangelical Church, made several trips to Haiti, along with other volunteers, to establish an orphanage outside the capital city of Port-au-Prince.

A post on the Growing Hope Ministries website states Nafziger, who also attends Archbold Evangelical Church, heard Grime speak about challenges for children in Haiti. She was reminded of her life there, and the children she left behind.

She and Katie Stoner, a classmate, “felt so badly for the children that we wanted to do something to help,” Nafziger said in the press release.

Their idea was to have a bake sale during a womens conference at the church to raise funds for Haitian orphans.

They planned the event with their mothers, then asked women in the congregation to bake cookies and other treats for the events. Nineteen women agreed.

Nafziger and Stoner delegated baking assignments, made signs, and arrived at the church after school on a Friday to set up for the sale.

The money went to Growing Hope and to Mission318, which operates a school and medical clinic in Haiti.

The press release quotes Nafziger as saying, “Most people think that helping people in poor countries is only for adults.

“But they’re wrong. Children can help too.”

As part of the Spirit of Community awards, Nafziger received $1,000 and an engraved silver medallion.

She will travel to Washington, D.C., in April to join winners from each state and the District of Columbia for national recognition.

During the trip, 10 students will be named America’s top youth volunteers of 2018.