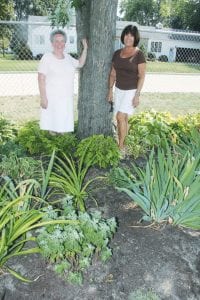 Grace Kinsey, left, and Dianne Roth, members of the Archbold Garden Club, in the flowerbed at Spengler Field, a project the club maintains as part of its civic activities. The club’s history in the village goes back more than 50 years.– photo by David Pugh

When members of the Archbold Garden Club planted a flowerbed at the south end of Spengler Field, they intended to have something blooming all the time.

“And it would have worked, if we would have had more rain this year,” said Dianne Roth, incoming club secretary treasurer.

The garden is planted with perennials that bloom year after year. Most of the plants came from the gardens of club members, but Roth said some were purchased.

This is the fourth summer of the project, “and it really looks better than I thought it would,” Kinsey said.

“Although the one on the end doesn’t look so good,” Roth said.

“Don’t forget all the bulbs– there’s lots of tulips and daffodils,” Roth said.

The women said club members see the garden as one of their civic activities, for the betterment of the community.

The Garden Club has a long history.

Irene Kluepfel was club president in 1958. Her husband, Otto, ran a jewelry store in Archbold.

“They were a famous couple in town,” Kinsey said.

The club promotes gardening for people who enjoy the activity and want to learn more about it.

Roth said the club meets on the third Wednesday of every month. Each month, there are programs about garden topics, guest speakers, and short trips to see other gardens,

That is, except for the month of December.

Each December, the club meets to decorate the Christmas tree at the Fairlawn Haven nursing home chapel. It’s another civic project.

At a recent meeting, a club member presented a list of plants that were drought tolerant.

There are approximately 20 members in the club, all women.

Male participation is currently limited to “just our husbands we bring along,” Kinsey said.

“We’re open to having men join,” she said.

But they may not be able to have the plant sale next year, because the drought has hurt the bulbs.

For many, gardening is a form of stress relief.

Roth said while she was working one job, “The more stressed I was, the more flowers I had. You could tell what kind of year I was having.”

“There’s something about getting out and digging in the dirt that is relaxing and rewarding,” Kinsey said.

“It’s a great stress reliever for anyone who has an inclination” to garden, Roth said.

“Then you sit down, have a cup of tea, and look at your flowers,” Kinsey said.