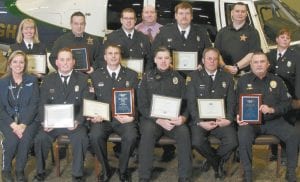 The team responsible for saving his life was recognized by Mercy Health-Life Flight, Wednesday, Feb. 6, with the Dr. Frank Foss EMS Excellence Award.

Mike Conrad, Life Flight director, said the award recognizes rescue workers for how they performed at the scene of an accident, illness, or injury, and how they interacted with Life Flight crews.

Conrad said crews are asked to pick out incidents in which they were involved that were out of the ordinary, “if you can say that anything is ordinary in this line of work.”

Information provided by Mercy Health states that in 1979, Foss “was the catalyst of the start of the St. Vincent Life Flight program. Now, 40 years later, his and our mission still stands strong.”

At about 1:30 am that March morning, ALS-1, the Archbold-based paramedic unit; Archbold Rescue; and Archbold police were dispatched to an industrial accident, to what they were told might be a partial amputation.

In an interview published in the Oct. 31, 2018 issue of this newspaper, Isaac Brenneman, APD officer, described the incident.

First on the scene, Brenneman used his U.S. Army training and experience. He applied direct pressure to the wound to stem the flow of blood.

For his role in the rescue, Brenneman was presented with the Spirit of Archbold award at the Archbold Area Chamber of Commerce Banquet, Nov. 1, 2018.

But Brenneman was quick to heap praise on others, particularly AFD rescue crews.

“The way they (rescue workers) reacted, and how fast they were able to get everything done– they really moved. You could tell they were organized. It was really impressive to see the amount of coordination,” he said.

Rescue workers coordinated with medical personnel at Mercy-St. Vincent Medical Center before Life Flight arrived, so that trauma surgeons knew what they needed.

“It was really well orchestrated, the way they communicated. It was very impressive,” Brenneman said.

“Archbold is extremely lucky that they have that amount of talent on that department.”

In addition to Archbold police and fire departments, Fulton County sheriff dispatchers were recognized, as well.

Dave Davis, AFD chief, said this is the fourth time the department received the Foss Award.

When asked if he was proud of his department, Davis said, “That’s what we’re in this business for, to have this opportunity to help people and save lives.”

He said rescue workers hope they never have to use their life-saving skills, but when they do, they’re ready.

In his October interview, Brenneman said the rescue was “a coordinated effort between a bunch of people who take their jobs seriously and want to help people.”

Conrad said those at Life Flight “were pleased with the way it (the rescue) went.

“When you see something like this, you know, it’s almost like all the stars line up, that there is a greater power at work here to put everybody in the right spot at the right time.”