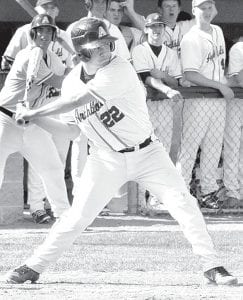 Jacob Wagner doubles to center field against Fairview, May 15.– photo by Mario Gomez

The Streaks close the season with a 20-6 record.

Archbold pounded out 11 hits. Zach Short led the way with three singles and two runs batted in. Taylor Price had a single, double, and four RBIs, and Jase Grosjean had two singles.

The score was tied at 1 after one inning. Start took a 2-1 lead in the top of the second, but the Streaks scored four runs in the bottom of the inning for a 5-2 lead.

The Spartans scored their last run in the third inning.

Archbold added three runs in each of the fourth and fifth innings to secure its 20-win season.

Short and Price combined for a three-hitter. Short (3-1) recorded the win; in four innings he gave up no runs on one hit and struck out seven.

“If you would have told me that we would win 20 games this season and be in the thick of the race for a league title without one of the best players in northwest Ohio (Tyson Dietrich not able to play due to an injury), I would have told you that you are crazy,” said Dick Selgo, AHS head coach.

“Our seniors led the charge to make sure everybody elevated their game, and that Tyson’s injury would not be used as an excuse.

“There are not many teams in the area that have that many wins.”

Tyson Schnitkey (4-3) suffered the loss. In two innings he gave up three runs on two hits, struck out three, and walked two.

The Bulldogs, ranked second in Division II by the Ohio High School Baseball Coaches Association, jumped out to a 3-0 lead in the bottom of the first and never looked back. They added one run in the third, five in the fourth, and one in the fifth.

With the score tied at 3 going into the seventh inning, Jacob Wagner drove in the go-ahead runs with a two-out single in the top of the inning.

Archbold had six hits. Walker had two singles, while Wagner had a two- RBI single.

Short picked up the win on the mound. In three innings he gave up no runs on two hits, struck out three, and walked one.

“They are going to be very difficult to replace. The way they played and the leadership they provided were the reasons we were able to win as many games as we did.

“Every one of them is going to be successful in life. “