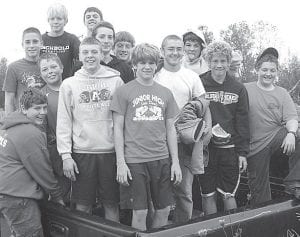 Most people wouldn’t consider picking watermelons a team-building exercise, but that’s exactly what the Archbold eighth grade football team did.

Norm Beck, one of the team coaches, and 13 members of the eighth grade squad traveled to Indiana early Saturday morning, Sept. 25, to pick watermelons for charity.

Beck said the melons went to a Toledo food bank.

Justin Lovejoy, a member of the team, said Amish people from Indiana had picked 62 semi loads.

“We thought we could go there and help them do a couple of loads.”

The approach to picking watermelons is to send 10 or so people walking down a row. If someone spots a watermelon, they bend over, pick it up, and toss it to the next guy, who tosses it down the line until the end of the row.

The melons are loaded into crates, then onto a semi trailer by a forklift.

Levi Wyse said bigger watermelons had to be walked to the end of the row, “because the coaches didn’t want them to break” if someone missed a catch.

“There was a lot,” Zach Meyer said.

The advantage, Lovejoy said, was that the players got to eat some of the broken melons. All said they tasted good.

Wyse said toward the end of their experience, they were intentionally breaking bad melons.

“The little ones, we threw at each other,” Meyer said.

As the day wore on, “they made us stand closer together and just hand them down,” Wyse said.

Lovejoy, a lineman himself, said the linemen on the team “were pretty iffy at catching” watermelons.

How were they at throwing?

“Worse,” Meyer said. “I just chucked them, and hoped they’d catch it.”

“I got the wind knocked out of me a couple of times,” catching large melons, Lovejoy said.

Wyse said he thought “it was good to be able to help the less fortunate.”

“It was a lot of fun, actually. But afterwards, my back hurt,” Meyer said.

Have they had enough watermelon for a while?

“The other day, my mom came home with watermelon, and I said, ‘Are you serious?’” Lovejoy said.–David
Pugh