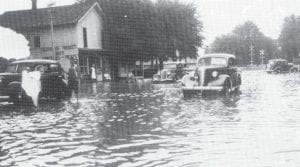 The June 1937 flood poured over North Defiance Street all the way from Brush Creek.

Editor’s Note: A variation of this article originally appeared in the July 10, 1991 Quasquicentennial edition.

Many people, especially younger members of the community and newcomers to the area, don’t really know why Archbold had, of all things, a “Carp” festival or why our village is known as “Carptown.”

The answer lies in the history of Archbold and Fulton County.

The village of Archbold, throughout its earliest history and well into the first half of the 20th century, has been subjected to severe June flooding at intervals of 15 to 20 years.

Before the days of storm sewers and tiling, it was not unusual to see the entire business district filled with enough water for rowboats to maneuver.

The flooding came when the waters of Brush Creek just east and south of town overflowed the banks.

Without the storm sewers and tiling we now have, the severe storm we experienced last month would probably have caused the same flooding.

The carp that normally stayed within the confines of the creek’s banks would swim along with the flood waters, and the result was that carp could be found in the business district of Archbold.

In 1937, the local postmaster, Henry J. Walter, caught a carp in the flood waters in front of the post office at 100 Depot St.

In 1918, the livery stable owned by Christian S. Nofzinger, located where the Circle K store is now on North Defiance Street, was flooded, and when the water receded several carp were left stranded on the floor.

These occurrences had happened at various times throughout the history of Archbold, but it took the rival town of Wauseon to give us our famous name.

In the late 1890s and early 1900s, there were, as there are now, many baseball leagues that competed throughout the summer months.

Games were played against other area communities such as Bryan, Stryker, Swanton, Delta, and, of course, Wauseon.

On Sunday afternoons, teams from the various towns would meet for their scheduled games. A fierce rivalry grew, especially between Archbold and the Fulton County seat of Wauseon.

In 1905, the Toledo & Indiana Interurban line was established in the county. Many of the “gay blades” began to take the trolley back and forth to other communities to court their favorite young ladies.

The young men from the different communities formed the Trolley League for the summer baseball games.

The games were played on a field north of the railroad tracks and west of Archbold at the east end of where Conagra now stands.

At that time, the trolley tracks were located just north of the railroad tracks, and an empty field provided a perfect playing area.

Because the young ladies who wanted to see the games didn’t want to get their long skirts dirty walking on dusty Stryker Street, they arranged that the trolley would pick them up in Archbold and drop them off next to the playing field for 5 cents.

All they had to do then was walk over a stile and they were at the field.

After the games, the young ladies and their beaus would flag the trolley down for the return jaunt to Archbold and go to one of the two drug stores on the main street for sodas or ice cream.

The Red Cross Drug Store, originally a frame building located at 203 N. Defiance St., was one of the favorite meeting places for the young couples.

One of the men who worked there was particularly known for giving our neighboring communities a hard time.

His well-aimed jabs often ruffled quite a few feathers, and Wauseon quickly became the frequent recipient of his quick-witted abuse.

It is unknown how long it took the people in Wauseon to plan their revenge, but revenge on Archbold they got.

Wauseon had long ridiculed Archbold about the flooding waters that left the carp flopping about the business district.

Needless to say, the carp were something of a sore spot and embarrassment to Archbold residents.

So one Sunday morning, when the owner of the Red Cross Drug Store opened for business, they found in the entrance lobby a cartoon left by their friends from Wauseon depicting a giant carp and proclaiming Archbold as “Carptown.”

For years, Archbold endured the jokes and humiliation of being known as Carptown.

The carp, an unglamorous fish at best, was not the ideal image for a town to have, residents felt. But now the joke has been turned to our advantage.

The carp is a part of our history, an amusing part now that we have the intervening years to look back over and time has healed the thrust of the insult. We have come to take pride in our carp.

So, outsiders, if you want to laugh and make fun of the idea that a town has a “Carp Festival,” go right ahead. But come right ahead, too, and see just how much fun a Carptown Festival can be!