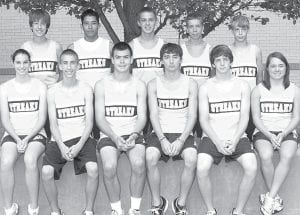 The Archbold cross country team is ready to kick off the 2010 season for Mike Wachtmann, head coach.

Wachtmann has spent the last eight seasons at the helm of the Blue and Gold and has been involved with the cross country team for the last 14.

“We intend to set a new standard of achievement for Archbold cross country,” Wachtmann said.

The Streaks return 11 letterwinners from last year’s squad that qualified for the regional meet and placed third in the district meet last season.

“The team is still young, but now with regional meet experience, they know what they must do to reach the next level,” said Wachtmann.

“Adrian Ramirez (2009 MVP) will be challenged by Zach D’Alelio, Zeb Frank, Alex Hurst and most of the rest of the pack. We expect to be on the radar at every meet we race.

“The entire team is rededicated and ready to step the work up a full notch. We expect to see constant improvement as the season progresses.

“We will definitely be a surprise team again, especially as the sophomores and juniors turn up the heat.”

“The girls are not out to make a statement, but rather to improve themselves and model athletic discipline to others.

“The girls are dedicated and optimistic that more athletes will step up and enjoy the benefits of cross country running.

“We will compete as a team only if we get more girls joining in the next few weeks.”

The Streaks’ first meet of the season is Saturday, Aug. 28 at the Defiance Early Bird.