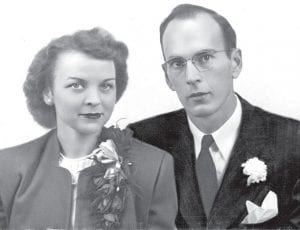 Top: Kathryn and Harold Meyer, in their 1945 wedding photo. The two fell in love while serving in the U.S. Army. They were married in the chapel of an Army hospital in Georgia, and were together for 49 years, raising six children. Right: The couple in a more recent photo. Harold died in 1995; Kathryn, in 2008. They are buried together in the Archbold Cemetery. –courtesy photos

It took nothing less than World War II to bring them together; but once together, nothing, not even Army regulations, separated them.

Harold Meyer, a Great Lakes seaman from Florida, and Kathryn Leupp, a nurse from Archbold, both serving in the U.S. Army, found each other in an Army Hospital in Augusta, Ga.

After high school, Harold joined the Merchant Marines, and worked the Great Lakes.

In Dec ember 1943, Harold was home in Florida while the lakes were frozen over. While at home, he ran into a family friend who was on the draft board.

“Even though he shouldn’t have been taken out of the Merchant Marines, he was drafted,” Brian said.

He was officially inducted into the Army in February 1944.

“When they asked him what he wanted to do in the Army, he told them anything but be on a boat, because he’d had enough of them.” 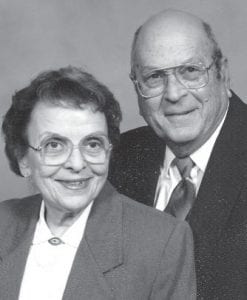 But the Army needed experienced seaman.

“He spent his entire time in the Army on one kind of ship or another.”

Harold and Kathryn’s daughter, Sharron Hillabrand, Findlay, said her mother was born April 20, 1923, in Henry County. She grew up on a farm three miles west of Archbold.

After graduating from Archbold High School in 1941, she went to Flower Hospital, graduating as a registered nurse.

Kathryn worked at the Monroe (Mich.) City Hospital until receiving her state board certification, then enlisted in the Army Nurse Corps. She was inducted in March 1945.

She began her Army career as a second lieutenant at Camp McCoy, Wis. She was promoted to first lieutenant and transferred to Oliver General Hospital in Augusta, Ga.

Sharron said Oliver General was a hotel that was taken over by the Army. The hospital specialized in ear, nose, and throat cases. Patients came to Augusta from all over the world.

Sharron said one of her father’s duties was to help dispose of drums of used lubricating oil.

They would take the drums outside Honolulu Harbor and throw them overboard. Then Harold, a sharpshooter with a .30-caliber rifle, would sink the drums by shooting them.

The used oil would float to the surface, creating a sheen on the water that confused an enemy submarine’s sonar.

Firing the rifle ruptured an eardrum, which became infected.

He was hospitalized in Honolulu hospital, then sent to Oliver General.

“He was on her ward. That’s how they met.

“He picked her out,” she said.

“His exact words were, ‘When I saw your mother, I thought she was the cutest little thing I had ever seen.’”

But something stood in their way. He was a master sergeant, an enlisted man. She was a lieutenant, an offi cer. Regulations forbid offi- cers and enlisted from fraternizing.

But, “My mother was very, very close friends with the woman who was in charge. She was a major, and she got special permission for them to marry,” Sharron said.

The couple was married in Oliver General’s chapel. Both were discharged in December 1946.

Harold and Kathryn were considering where to settle down, but after spending time in Archbold, “Dad fell in love with the seasons,” Sharron said.

Kathryn became a nurse at the Detwiler Hospital, Wauseon, then later, at Fairlawn Haven. She retired from Fairlawn.

Harold started with the Archbold Post Office as a janitor in 1947.

He retired in 1984, 37 years later, as postmaster. For 13 years, he served as the Ruihley Park supervisor.

A fourth son, Mark, died in a 1982 auto accident in Napoleon.

Harold died in October 1995; Kathryn, in April 2008. They are buried together in the Archbold Cemetery.

Theirs is like many wartime stories: two people who would never otherwise meet, find themselves far away from home in the service of their country, and fall in love.

Even today, they are still together.