Damage from Sunday’s early afternoon thunderstorms has been reported at the Archbold ConAgra plant.

The Archbold Fire Department was called to the plant about 12:38 pm.

Dan Hare, company spokesman, confirmed there were no injuries after the thunderstorm struck the plant.

“We have people at the facility assessing the damage, and we will not run any production tomorrow (Monday),” he said.

Dave Davis, AFD chief, said the damage to the building appears to be storm-related.

The most heavily-damaged portion of the plant appeared to be the south side, visible from Co. Rd. 24 and from Lafayette Street.

Metal siding or roofing material was blown into power lines along the north side of the Norfolk Southern railroad tracks. At least three Toledo Edison trucks were at the scene, along with Ohio Gas Company crews.

Davis said natural gas and electric service to the plant has been turned off.

Insulation from the plant is spread all over the south side of the community. Hare said the insulation is standard.

“We encourage anyone involved with cleaning up to do so with care and safety in mind,” he said.

Lonnie Fisher, a meteorologist with the National Weather Service office in northern Indiana, said at about 4:15 pm Sunday, they were receiving conflicting reports.

A line of thunderstorms, “started to get organized as they moved across Indiana. As they crossed they were gaining steam,” Fisher said.

Based on early reports Fisher said it appears the damage was related to straight-line winds.

“When it came out of Williams County, we had sporatic reports of damage,” Fisher said.

There were reports tornadoes in the area of Blackford and Jay counties in Indiana, and Mercer County in Ohio.

For northwest Ohio, Fisher said, “The bulk of the action should be done for the night.” 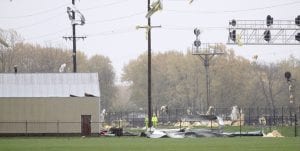