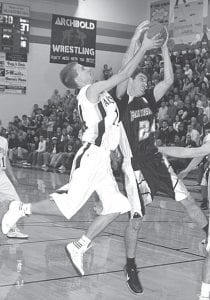 Archbold relied on the foul line in the closing minutes to seal a 47-39 non-league win over Pettisville in front of a packed Thunderdome, Thursday, Dec. 22.

“I tip my hat to Pettisville. They are well coached and go at it,” said Doug Krauss, AHS head coach.

The Streaks upped their record to 5-1.

“I thought our kids played really hard. We just have to play smarter,” said Greg Nofziger, PHS head coach. The Birds dropped to 2-3.

“This was a great learning experience for us. Archbold brought many challenges for us, and I thought the kids did an excellent job of handling those challenges as the game progressed.”

The two squads could not have played a more even game through the first three quarters.

Pettisville scored the first bucket of the game on a putback by Zach Pursel.

Archbold answered with a put-back from Tyson Dietrich, giving the Pettisville and Archbold faithful a taste of what was to come.

Pettisville answered on a drive by point guard David Reyes. Archbold’s answer was a jumper by Luke Kammeyer.

Reyes again scored, taking it into the heart of the Blue and Gold with a drive down the middle of the lane.

Reyes would lead all scorers with 18 points. The Streaks put two in double figures, with Zeb Frank tallying 17 and Kammeyer, 12.

Trailing 6-4, Frank hit a pair at the charity stripe, but Reyes pulled up for a five-foot jumper and an 8-6 Blackbird lead.

Frank soon quieted the visiting Birds with back-toback three-pointers to end the first quarter with Archbold ahead 12-8.

The second eight minutes was a near mirror of the first. Reyes opened the scoring and Archbold followed with a conventional three from Kammeyer.

Arrin Short added a deuce for the Birds. Kammeyer and Dietrich scored the next two baskets for a 19-12 Archbold advantage.

With just a minute left in the first half, Short hit from the top of the three-point arc for PHS. After the Streaks came up empty, Pettisville added two free throws from Josh Borton, and the half came to a close with Archbold on top, 19-17.

“We talked to our kids about Pettisville, and told them no one plays harder than Pettisville,” said Krauss.

“Actually, I thought we were fortunate to be ahead at halftime, because in my opinion Pettisville should be ahead because they worked harder.”

Streaks Lead By One

Archbold came out in the third and looked to put the Birds away with two quick baskets by Frank and Kammeyer.

The Birds quickly shut down the short run by the Streaks with a baseline drive from Aaron King.

Kammeyer added two for the home team, but the Birds silenced the Archbold fans with a five-footer from Borton followed by a conventional three from Reyes.

King came up with a steal at the Archbold end of the court, and Reyes converted the turnover into two more PHS points.

Reyes was fouled by Taylor Price on the play, went to the charity stripe, and capped off an 8-0 run for a 29-28 Blackbird lead, their first lead since the first quarter.

The Blackbirds hit 8- 8 from the charity stripe for the contest, while the Streaks went 16-25.

The lead did not last as Evan Wyse hit one from the foul line.

Archbold answered with Frank converting a conventional three for a 32-31 Archbold lead to start the final eight minutes.

As hard as the two squads played for 24 minutes, PHS picked the wrong time to struggle. The Birds hit just 2-9 from the field in the final quarter.

“We needed some of those shots to drop in the fourth quarter,” said Nofziger. “We struggled from the field.

“I think our kids may have been a little gassed, but at the same time we need to be able to play through that.

“Archbold played a physical game, and that was great for us to see and be involved in.”

On the other end of the court it was the Streaks taking advantage of the charity stripe.

Forced to slow the clock, the Birds started fouling. Archbold connected on 9-17 from the foul line to seal the win.

“Our foul shooting was better; it’s the best we have done in a while,” said Krauss. “We do a lot of shooting in practice. It’s a mind over matter thing. It’s a concentration thing, and I think our guys are good-enough shooters.

“We will get better.”