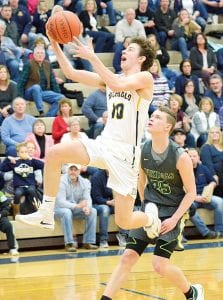 Jeron Williams drives to the basket against Evergreen’s Nic Borojevich, Friday, Feb. 15. Archbold kept its record in the NWOAL unblemished at 6-0 with a 58-48 victory.– photo by Mario Gomez

Archbold moved one step closer to an outright Northwest Ohio Athletic League boys basketball championship with a 58-48 win over Evergreen (15-4, 4-2 NWOAL), Friday, Feb. 15, in the Thunderdome.

The Streaks (19-0, 6-0 NWOAL), who were ranked first in the Division III state Associated Press poll from beginning to end, clinched at least a share of the NWOAL title. They can claim an outright title with a win over Swanton (9-11, 2-3 NWOAL) tomorrow, Thursday.

“Good teams are gonna make runs at you,” said Joe Frank, AHS head coach. “I told the kids, ‘Championship teams find a response,’ and we found one.

“We were able to execute down the stretch. Thank goodness we turned them over some, because if they got shots in all those possessions it could have been a different outcome.”

The first quarter was back and forth as Archbold led 7-5 midway through.

Mason Leoffler and Nate Brighton pushed Evergreen ahead for the first time at 9- 7, but it was quickly erased by an Elijah Zimmerman three-point play.

The teams traded buckets to end the first with AHS leading 12-11.

Evergreen used a pair of three-point baskets to take a 19-16 lead with 3:46 left in the first half.

The Streaks scored the next six points to go up 22-19, but Chandler Lumbrezer’s layup pulled the Vikings to within a point, 22-21.

With just over a minute left, the game took a fortunate turn for the Streaks.

On the ensuing inbounds pass, Ramos got the steal and drove for a breakaway slam dunk that energized the crowd, forcing the Vikings to take a time-out with 52 seconds remaining.

AJ Mahnke ended the half with a layup and foul, completing a traditional threepoint play and going into the locker room with the mo- mentum and a 30-21 advantage.

“The key was the last two and a half minutes of the first half,” said Frank. “We just seemed to turn up the heat and find another gear.

“We knew that if we kept pressure on them, at some point in time it was going to pay dividends.”

Archbold had an 11-4 scoring advantage over the first five minutes of the third to lead 41-25, and Evergreen trailed 45-31 going into the fourth.

Jeron Williams opened the final stanza with a threepoint bomb, and Zimmerman scored to give Archbold its biggest lead of the night, 50- 31.

After the Vikings pulled within nine, 52-43, with 4:49 remaining, Archbold used some timely scoring and ball control to secure the 58-48 win.

“We put ourselves in position for every game to be big now, and that’s because of what the kids have done– how hard they’ve worked and executed,” said Frank.

Brighton scored 18 and Loeffler chipped in 13 for EHS.