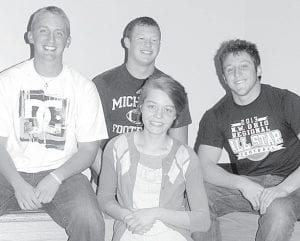 Four Archbold High School seniors got together to talk about their years in school at Archbold. From left: C.J. Gladieux, Levi Gerig, Ashley Delaney, Darin Sauder.– photo by David Pugh

The Archbold High School Class of 2013 worked hard, but knew how to have fun.

There were possibly three or four class clowns, but their antics weren’t malicious.

And while they congregated into small groups or cliques in junior high and their first two years of high school, during their junior and senior years, they all bonded together.

And as the days wind down toward graduation, Ashley Delaney said, “I think we’re spending more time hanging out, to cherish those moments we do have together.”

Darin Sauder said some students are more emotional over the end of their high school careers than others.

“When you stop and think about it… some of us have been together all 13 years. Even if you didn’t really know everybody, we’ve still been associated with them,” Sauder said.

C.J. Gladieux said, “I think of everybody (in the class) as your extended family. I kind of see it that way.”

The Class of 2013 is the first graduating class to spend an entire year with school-issued tablet computers (iPads).

While many marvel at the wonders of new technology, some students may not have shared the excitement.

“At first, I thought it was kind of dumb,” said Levi Gerig. “Probably the first semester, I didn’t really care for it.”

While he got used to the device in the second semester, “I’m tired of technology. I’m a little bit of an old school guy.”

Delaney “didn’t mind it too much, because it was a lot less to carry around, and you had everything in one place. It was easier to organize my thoughts,” she said.

What happens if the tablet battery goes dead during the day?

Sauder said some teachers will allow a student to use a wall adapter, and move a desk close to an outlet.

“It happened to me a couple of times, but you don’t really need it. It isn’t the end of the world,” Gerig said.

“It was kind of easier and quicker (to study). If you forgot something, there were online textbooks you could use,” Gladieux said.

But Sauder said for him, it was harder to study with the iPad.

“I would get distracted,” he said.

“By the other apps, the Internet, or all the various other things on them,” he said.

When asked whether or not there were class clowns in the Class of 2013, there was a moment of silence, then Sauder burst out, say- ing, “Don’t look at me!

“We may have had a class clown. Maybe a couple. Maybe a few,” Sauder said, adding, “I may have been associated with that, or I may not. I don’t know.”

Many students are involved in sports, and during their after-school hours, they would practice that sport, or just spend time together.

Delaney said she had an after-school job, so in her off time from school, she would work or attend youth meetings connected with her faith.

“When it’s nice out, we’re always outside, having campfires and stuff. Or we’ll chill at someone’s house,” Sauder said.

“It’s Archbold. You’ve got to find your fun.”

The students were asked if there was a class “grapevine,” where news about each other passes quickly.

For example, if two students had been dating, then broke up on Sunday night, how soon would the rest of the seniors know?

Will there be success stories out of the Class of 2013?

“Most kids in our grade will be pretty successful,” Gerig said.

“Our class is pretty hard working. I don’t see that changing.”

For some, being successful will mean earning “six figures a year. Some others will consider themselves a success if they are doing something they love, and do it for the rest of their lives.”

“I see so much potential in our class,” Delaney said.

The seniors also offered some advice.

“For the younger kids, once you get to high school, yeah, it has its ups and downs,” Sauder said.

“It’s hard, but if you work hard, do what you’re supposed to do, meet your deadlines, and turn stuff in, it will turn out the way it’s supposed to.

“Enjoy every day,” Gerig said. “Everybody says it flies by, because it goes quickly.

“Enjoy every day, because you can’t get it back.”