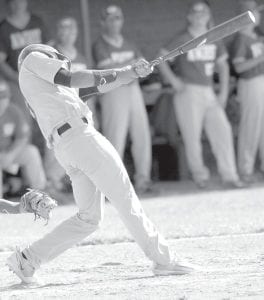 Nic Rodriguez in an at-bat against Anthony Wayne in the first round of the state Acme tournament. Archbold won the game 4-1.– photo by Mary Huber

The win moved the Streaks on to the state tournament.

The district tournament was postponed after inclement weather canceled two days of play.

Archbold defeated Miller City 5-0 and bested OG 12-0 to reach the finals and await the winner of the loser’s bracket.

O-G defeated Miller City 14-12 to reach the finals against the Streaks.

Archbold jumped out quickly with a pair of runs in the first inning on run-batted-in hits from Gabe Petersen and Kade Kern.

Mitch Grosjean scored the third run of the game in the second inning on a wild pitch to extend the lead to 3-0.

O-G scored in the top of the third inning on an Archbold throwing error.

Jeron Williams scored on a sacrifice fly in the bottom of the third to regain a three-run cushion at 4-1.

Archbold pushed another run across the plate in the sixth and sat the Titans down in the seventh for the 5-1 victory and a return trip to the state tournament. 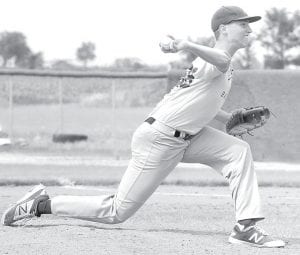 Bryson Taylor allowed one run on three hits in five innings of work against Ottawa-Glandorf in the District 2 Acme final. He struck out one and walked five.– photo by Mario Gomez

“That was kind of our expectation this year,” said Kirk Weldy, Archbold head coach.

“We only lost two guys from last year, so a lot of guys were itching to get back to the state tournament.

“We put ourselves in a nice position not having to go through the loser’s bracket.”

Archbold has used its high school loss to Eastwood in the Division III regional semifinals to help lead the charge into the Acme season.

“When they got beat in the regional semifinal I talked to some of the seniors and they wanted to go right away,” said Weldy.

“They used losing as motivation.”