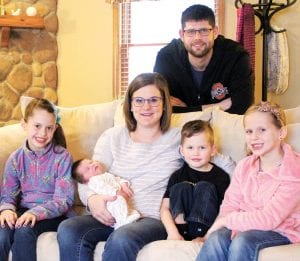 The Boultons, of Pettisville, with the newest member of the family, Traver Clark. Born the morning of Thursday, Jan. 3, he is the Archbold Buckeye First Baby of 2019. With Traver and his parents, Kelly and Ryan, are sister, Locke, 8, at left; brother Finnlee, 3; and sister Emery, 6.– photo by David Pugh

The world didn’t have to wait long for the Archbold Buckeye First Baby of 2019 to arrive.

Kelly Boulton delivered her son, Traver Clark, at 3:23 am, Thursday, Jan. 3, just a little over 51 hours into the New Year.

Kelly and her husband Ryan, Pettisville, said Traver was a name they found in a baby book and liked.

His name could have been Harry, based on the mop of dark hair he was born with.

Kelly said her daughters, Locke, now 8, and Emery, 6 each had a little bit of hair when they were born. Emery had the least amount of hair, but hers was the blondest.

Her son Finnlee, Finn for short, 3, had dark hair when he was born.

Traver’s hair has more natural highlights which the girls are jealous of, Kelly said.

An old wives’ tale states that if an expectant mother has heartburn, the child will be born with hair.

So, did Kelly have heartburn?

“Oh, I ate some Tums. I actually had two the night I went into labor,” she said.

Once the delivery process started, Traver arrived in less time than it takes to get a pizza.

Kelly said it was eight minutes from the time they arrived at the Fulton County Health Center to the time Traver was born.

There was a rumor that Kelly didn’t make it to the obstetrics unit, but that’s not true.

“I did make it to the OB unit, but the doctor did not make it in time. The nurses delivered him,” she said.

The process went well, she said.

“We had our very last Christmas the night before with family from out of town. The next day, I had planned to go and get all the baby essentials.

“My doctor was on a mission trip. He didn’t leave until (Saturday), so I had thought I would probably not deliver until he got back.”

Kelly said predictions for Traver’s gender had all called for a girl, except Ryan.

“Dad was the only one that said it was going to be a boy,” Kelly said.

Locke explained, “We have lots of girls in our family. We have three cousins that are all girls.”

She later updated that to four girl cousins and three boys.

“Pickles have always been a favorite of mine, but they were even more of a favorite during pregnancy,” she said.

“And I ate a lot of peanut butter– that would probably be a craving. Nothing like some peanut butter and a big glass of milk.”

“All of our kids’ eyes stayed a bright blue until they got older, like six,” Kelly said.

Kelly starts to give Traver’s vital statistic at birth, but Emery interrupts.

“Oh, can I say it? Eight pounds and 1 ounce,” Emery said, interjecting some pride with the extra ounce.

Kelly said the first couple of nights he was home, Traver had his days and nights mixed up. But that’s changed, and now he is up only a couple of times during the night.

The children got to visit their new little brother in the hospital, hours after his birth.

“And we got to eat lunch and supper there,” Emery said.

“The hospital cafeteria is a big hit with them,” Kelly said.

That, and the elevator.

“There’s like these buttons you can press. You can go up and down, up and down,” Emery said.

In addition to his parents and siblings, Traver is welcomed by grandparents Curtis and Judy Nofziger, Archbold, and Larry and Gloria Boulton, Napoleon. His great-grandfather is Lawrence Boulton, Camden, Mich.

“I want to see his face when he grows up, then I want him to turn back into a baby,” Locke said.

The Archbold Buckeye First Baby of 2019 will receive several gifts, including:

•And a year’s subscription to the Archbold Buckeye.­Archbold