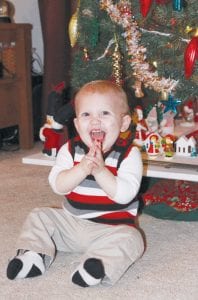 “He doesn’t like to get out” of the bathtub, said his mom, Erika Bennett, Archbold. Karson’s dad is Jalen Longoria, Archbold.

“One time I went into the bathroom, getting him ready for his bath,” Erika said.

“I got his clothes off, but he still had his diaper on. I started the bathtub and turned around to get the towel out of the drawer. I turned back around.

“He had his diaper off and he’s trying to climb in.

He steps out of his pants, too.

“I think that is adorable,” said Erika. “He just pulls his pants down and steps out of them.”

He likes to stand up on Erika’s bed in the mornings and watch her goldfi sh, Doc.

“I had seven of them, and I named them the Seven Dwarfs names,” said Erika. Doc “is the last one.”

“(Karson) just looks at it and watches it.”

He weighed 8 pounds, 9 ounces, and was 21 inches long when he was born. Karson now weighs 21 pounds and is 29 inches long.

With eight teeth, Karson is “starting to eat solid foods, but he likes them in the baby food,” said Erika.

“He likes sweet potatoes, carrots, and pears. He loves bananas.

Karson likes french fries, but Erika, who craved cheese fries with bacon and gummy bears while she was pregnant, hasn’t had those two foods since.

“He loves to be outside,” said Erika. “He likes to eat the dirt. He can pull the grass and throw it.”

Karson didn’t have much blond hair when he was born, but it’s grown an inch or two, and now he has little curls in one spot on the back of his head.

He also has blue eyes.

He started crawling when he was around 7 1/2 months old, and started walking over Thanksgiving. But he doesn’t like to wear shoes.

When they went to the Toledo Zoo to see the lights display, “he wanted to touch everything,” said Angela. Karson kept saying “pretty” over and over, she said.

“The other day, (grandma Angela) said the duck goes quack quack and he repeated it out of nowhere,” Erika said.

The Archbold Buckeye First Baby of 2013 will be the first child born at any hospital after 12 am, Tuesday, Jan. 1, 2013, to parents living in the Archbold or Pettisville school districts.

Karson’s successor will be featured in one of the first issues of the Archbold Buckeye in 2013 and receive a multitude of gifts from area businesses.

Parents who think their baby may be the Archbold Buckeye First Baby of 2013 should refer to page 3 for details and information on how to report the birth to the Buckeye.