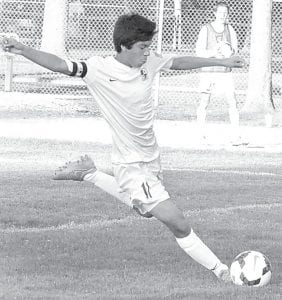 Despite playing all but the first five minutes of the match shorthanded with ten players due to a red card infraction, the Streaks managed a 4-0 win.

Kaiden Bedsole gave Archbold an early lead when he scored in the fourth minute from 10 yards in the middle of the field after a pass forward from Jeremy Lerma.

Just a minute later, Archbold was forced to play with 10 players after a foul in the midfield area was booked as a red card offense.

After a scoreless remainder of the first half, Archbold struck again two minutes after halftime.

Lucas Yoder headed in a serve from Josh Kidder at 8 yards after Kidder outmaneuvered several defenders to get free on the right side.

With six minutes remaining, defender Kegan Ott gave AHS some additional insurance with a powerful upper 90 goal from 25 yards on the left side, with Lerma again assisting. 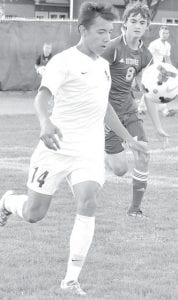 Less than a minute later, Lerma converted a penalty kick for the 4-0 final.

Kidder earned the PK opportunity by getting fouled in the penalty area– his second PK award of the match.

“After the early red card, the boys did a great job of focusing on what they needed to do to beat Maumee short- handed,” said Stewart.

“After stumbling in the first two matches of the season, these players have turned things around and really gelled as a team.

“That should serve us well as we begin the second half of the season.”

Archbold led both the shots on goal and corner kick tallies, 7-2.