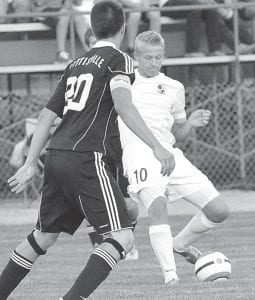 The Archbold boys soccer team began its 2013 campaign with a pair of close victories over Van Buren and Pettisville.

The defending district champions traveled to Van Buren, Tuesday, Aug. 20, for the season opener for both teams.

The teams battled evenly until the 33rd minute of the first half. Archbold senior Andrew Mayer passed a ball from midfield to midfielder Brodie Nofziger, who broke away from the defense for a shot 20 yards out that rippled the left side of the net.

Both teams had several more scoring chances but the 1-0 result stood.

The Streaks hosted the Blackbirds in their annual battle under the Spengler Field lights, Saturday, Aug. 24.

Both teams struggled to score in the first half as the defenses controlled the tempo.

Archbold broke the deadlock three minutes after halftime when junior defender Matt Sevey passed from left midfield to Nofziger, who dribbled to his right before cutting back left, creating just enough space to fire a left-footed gem from 18 yards into the left upper 90 section of the goal.

Pettisville answered 12 minutes later when senior forward Troy King blasted a shot from the left side at 20 yards that deflected off an Archbold defender before landing in the goal.

Archbold broke the tie for good with 16 minutes remaining after a corner kick by junior midfielder Zach Meyer.

The Pettisville defense attempted to clear Meyer’s kick downfield, but the ball deflected off AHS senior defender Tyson Schnitkey to a waiting Nofziger, who finished what turned out to be the game winning goal from 6 yards away.

Nofziger’s goals were the 39th and 40th of his career, establishing him as Archbold’s new career goals leader.

The senior surpassed David Bontrager, a 2013 gradudate who finished with 39.

Archbold had an 8-6 edge in shots on goal, while both clubs launched three corner kicks.

In the JV match, Kyle Ott scored with a corner kick assist from Kegan Ott for a 1-0 victory.