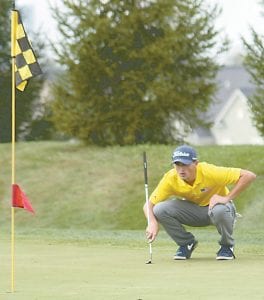 A version of this article was posted to www.ArchboldBuckeye.com, Sunday, Oct. 15, 11:30 am.

The Archbold boys golf team finished with a team score of 660 to finish eighth at the Division II state tournament, Friday and Saturday, Oct. 13-14, at North- Star Golf Club, Sunbury.

The Streaks improved three places from 2016, when they finished 11th.

Archbold also advanced to the 2008 state tournament in Div. III, where the Streaks finished ninth.

Gahanna Columbus Academy won with a score of 596, 20-over par.

Chardon Notre Dame-Cathedral Latin finished second for the second straight year with a team score of 606, and Kettering Archbishop Alter was third with 628.

The appearance caps off a season in which the Streaks won the Northwest Ohio Athletic League for the third straight year, were sectional runners-up, and were district champions for the first time ever.

NorthStar “had 20 or so ponds on it and lots of bunkers, too,” said Mike Rosebrook, AHS head coach.

“Some of the bunkers were still wet from all the rain (from previous storms), and they all played a little inconsistent, to say the least.

“Not striking our irons clean was probably our biggest issue. You have to go for it over the ponds and bunkers if you want to be anywhere near the pin locations, so sometimes it was either par or double bogey if you didn’t make it.

“The course was designed to test the best golfers, and it was a real treat to have that experience.

“Honestly, I think we played a lot better than we scored.

“We all played 16 pretty good holes each day, but the other two cost us some big numbers. I was really hoping for a top five finish before we left, and we easily had the skill to do better.

“Our team total for three days was 660, and 656 would have put us in fifth place alone. I always marvel at how close it is at that level of play.

“I’m incredibly happy with how we handled ourselves and the course. Last year we finished 11th, so this was a definite improvement.

“Kade Kern and Mitch Grosjean dropped so many strokes from last year that they smiled when I asked how they thought next year might go.

“The round of the year this year will be Trevor Rupp’s 75 on Saturday. He shot 73 at Auglaize earlier this season, but that wasn’t under near the pressure or on as tough of a course.

“I kept hearing how well he was playing, so I never once talked to him. I wish I could have watched the whole thing, but when that happens I spend all my time coaching the others.

“He managed to keep his swing under control, as well as his composure. When he missed a fairway he would knock it out of trouble to a spot where he had a chance to chip it close enough for a makeable putt, and that strategy paid off.

“As a coach I always say look for a good place to leave yourself to get up and down, and he did it brilliantly all day.

“The 75 from Saturday bested Brandon Miller, his own teammate, from last year at the Scarlet Course in Columbus by one stroke. Knowing Brandon and Trevor, I’m sure they will debate forever about which course was harder!

“Brandon looked like he was about ready to tear it up on Saturday. I know he wasn’t happy with an 86 the second day, but he really seemed to enjoy every minute of his last high school tournament.

“Ending at the state tournament is everyone’s dream, regardless of how well you play. He carried the team well through most of the season, and has been golfing long enough to know that sometimes it just doesn’t go your way.

“We worked on the range a little Friday night, and Kade hit it a lot better on Saturday. I am really impressed with how he manages to score from just about anywhere.

“He is developing a mentality that he can still play well even on an off-day. His consistency next year will be truly amazing. He has been to state twice, and is only a sophomore.

“There are some lessons that can only be learned during competition at the next level. I believe he will continue to rise up to the challenge no matter how high he sets his sights.

“I spent a lot of time watching Mitch play and talking about how much better he is in only a year’s time. He has the smoothest, most balanced swing you could ask for and is a good putter, too.

“A little work on those tricky half- and three-quarter wedges and he starts to make a lot of birdies next year.

“I keep telling A.J. that his swing looks like a million bucks. He put a lot of hard work in starting in April and continues to be a student of the game. I can see a big improvement in his short game, too.

“I told him the payoff will be next year, because he keeps listening to me even though it doesn’t always feel comfortable swinging the club the way I want him too.

“A couple of those bunkers and other hazards got the better of him, but he’s learning how to recover and also gaining valuable tournament experience.

“He finished this year’s tournament with about the same score as a few of them did last year on their first trip to state. He is another one that will be a leader on next year’s team.

“Overall, I am thoroughly pleased with the growth of our team this year. The experience and knowledge we gained will make us that much better in the future.

“These guys continue to set new standards for hard work and dedication, paving the way for future success.”