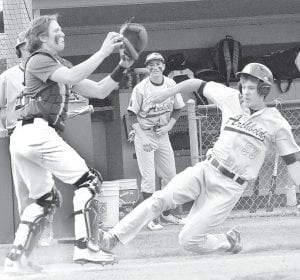 Seth Mayer slides but is unable to beat the throw home against Swanton, Monday, April 25.– photo by Mario Gomez

The Archbold baseball team improved to 15-5, and leads the Northwest Ohio Athletic League with a 5-1 record after three wins and one loss last week.

The Streaks picked up a 9-2 win over Swanton in NWOAL play, a 5-4 nonleague win over Paulding, and a 4-0 win over Fairview, but dropped a 2-1 contest to Toledo Start.

At the plate, the Blue and Gold pounded out 12 hits. Ian Radabaugh led the way with two doubles, a single, and 3 runs batted in. Brandon Miller and D. Walker each recorded two singles and 1 RBI. Seth Mayer hit an RBI double.

Archbold had to come from behind, Tuesday, April 26, to knock off the Panthers 5-4 at Archbold.

The Streaks scored two runs in the first, but the Panthers (6-4) scored one in the fourth and three in the fifth for a 4-2 lead.

Archbold crossed the plate three times in the bottom of the fifth to register its 14th win.

Ben Bucklew (5-0) picked up the win, giving up four runs on three hits, striking out six, and walking three.

Mayer had a double, single and 2 RBIs. Toby Walker and D. Walker each hit two singles, while Bucklew had an RBI single and Babcock tripled.

Archbold hosted Fairview (10-5), Friday, April 29, and came up with a 4-0 shutout for its seventh victory in the last eight games.

Miller (4-1) pitched a five-hit shutout, striking out four and walking one.

The Streaks played stellar defense with no errors and out-hit the Apaches 8- 5. Bryce Williams had two singles and one RBI. Radabaugh had an RBI single, and T. Walker had a two- RBI single. Bucklew recorded a double.

Archbold hosted Toledo Start (5-8), Saturday, April 30, and suffered a 2-1 loss when the Start centerfielder made a diving catch on a line shot by Bucklew and turned it into a double play in the bottom of the seventh to end the game.

Babcock (3-1) suffered the loss, giving up two runs on six hits, striking out four, and walking one.

At the plate Williams and T. Walker notched two singles each.