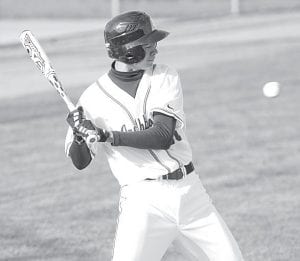 With the score tied at 3 going into the bottom of the sixth inning, Napoleon scored the winning run to defeat Archbold 4-3, Thursday, April 5, in non-league baseball action at NHS.

The Streaks hosted a doubleheader with Delta, Saturday, April 7. Archbold lost the first game 7-0 but won the second 16-2 to raise its record to 5-3.

The Streaks jumped out to a 2-0 lead after two innings. Napoleon (2-4) crossed the plate in the bottom of the third and Archbold scored in the fourth, giving AHS a 3-1 lead.

The Cats added two runs in the bottom of the fifth to tie the score at 3, and scored the winning run in the sixth to squeak past the Blue and Gold.

Tyson Dietrich (2-1) suffered the loss on the mound, giving up three runs on four hits, striking out five and walking four. Tyson Schnitkey pitched in relief; in one inning he gave up one run on no hits.

In a pitchers’ duel, each team garnished four hits.

Delta scored three runs in the fourth inning, one in the fifth, and three in the seventh as Justin Callahan pitched a four-hit shutout.

Schnitkey was the losing pitcher. In five innings he allowed four runs on six hits, struck out three, and walked two. Kolin Schilt pitched in relief.

Archbold had four hits, and was led by Michael Walker with two.

Archbold recorded a 16-2 non-league victory over the Panthers (2-7) in the second game.

The Streaks blasted 14 hits with Taylor Price picking up the victory. In four innings he gave up two runs on three hits, struck out two, and walked three.

Archbold took control early, crossing the plate 11 times in the first inning. The Streaks crossed the plate once in the second and twice each in the third and fourth innings.

Delta scored its two runs in the second.