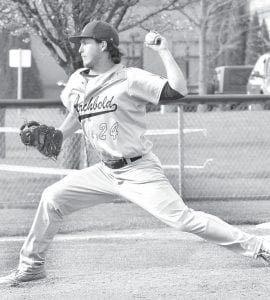 The Archbold baseball team suffered a pair of setbacks last week before rebounding with a win over Hilltop.

The Streaks lost 3-1 to Tinora and then lost a key Northwest Ohio Athletic League contest to Bryan, 6- 1.

Tyler Giesege was in command from start to finish on the mound, giving up just one hit to Bryce Williams, a run-batted-in single in the second inning that tied the score at 1.

Brandon Miller was the losing pitcher. In one inning he allowed one run, struck out two, and walked two. Trevor Rupp pitched in relief. 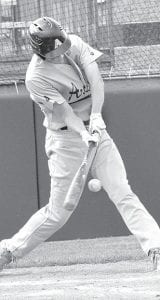 Ian Radabaugh gets a hit to left field against Swanton, April 25.– photo by Mario Gomez

Lathon Babcock suffered the loss, giving up six runs on five hits, striking out one, and walking three.

The Bears are a half-game ahead of Wauseon (5-1) in the battle for the league title.

Bucklew upped his record to 6-0 with a 5-2 win over the Cadets, Friday, May 6. He went 6 2/3 innings on the mound, giving up two runs on seven hits, striking out seven, and walking three.

The Vikings defeated Wayne Trace 6-1 in their sectional semifinal on Saturday, May 7.