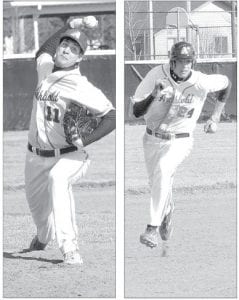 Left: Michael Walker was on the mound for Archbold in the Streaks’ 9-4 non-league win over Pettisville, Monday, April 1. Right: Tyson Schnitkey rounds second base on his way to scoring for AHS.– photos by Mario Gomez

The Archbold baseball team picked up a trio of wins last week to stay undefeated at 8-0, 2-0 in the Northwest Ohio Athletic League.

The Blue and Gold, ranked ninth in the Division III Prep Baseball Report, beat Delta 9-3, squeaked by Napoleon 5-4, and shut out Liberty Center 10-0.

Archbold scored three runs in the second inning, but Delta came back in the fourth with two.

AHS plated six runs in the fifth for a 9-2 lead. The Panthers scored one final run in the seventh for the 9-3 final.

At the plate, Zach Short was 2-3 with a double and two runs batted in. Zach Zimmerman hit two singles and had one RBI, while Emerson Radabaugh hit a double and Micah Bernath hit a two-RBI single.

Stuart Wyse laid down a squeeze bunt in the bottom of the fifth that scored Schnitkey in what proved to be the winning run in Archbold’s 5-4 win over Napoleon (0-5), Tuesday, April 9.

Taylor Price (2-0) picked up the win and combined with Schnitkey to throw a four-hitter. Price struck out nine and walked seven.

Archbold had six hits. Jase Grosjean and Michael Walker led the way with two singles each.

In six innings Walker (2- 0) struck out six and walked one.

Grosjean led the Streaks at the plate with a single, double and triple as the Streaks blasted 15 hits.