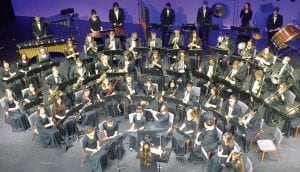 The AHS band, performing at a concert, Monday, March 4, in the AHS auditorium. Also performing that night was the Wauseon High School band. The band performances were evaluated in preparation for the District Large Group adjudicated event, Saturday, March 9, in Sylvania.– courtesy photo

Beth Voll, AHS band director, said the band competed in Class C for about 15 years. About three years ago, the decision was made to move up to Class B, where the music is more difficult.

“As a band, we set goals in January and decided we wanted to push ourselves with challenging music instead of playing easier ‘safe’ music, and we totally reached our goals,” Voll said.