See video from the fire by clicking on the Video Index 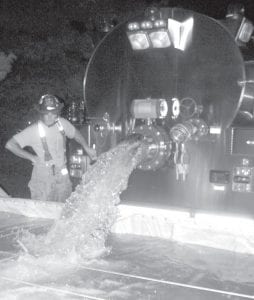 Archbold Fire Department was one of three departments that assisted Wauseon with a barn fire at 9818 Co. Rd 17-3 north of Tedrow, Thursday night, Sept. 2.

Raymond and Mary Jane Moden, of the same address, are the property owners.

“Once we learned it was a barn that was fully involved, we called Archbold and Morenci (Mich. fire departments). Then we added Fayette,” Sluder said.

Once firefighters arrived at the scene, they found the old-style wooden barn had collapsed.

The first priority was to wet the area to protect the home, Sluder said. The only damage to the field was scorched soybeans.

“There was no risk of a wildfire,” he said.

Firefighters had to deal with 500 bales of hay in the barn; eventually, a hydraulic excavator was called in to help.

Sluder said the cause of the fire is undetermined. No damage figure was available.

A horse, two goats, and 30 chickens inside the structure were lost.

Thieves Break Into OfficeWoman Arrested On WarrantSuspicious Vehicle At Dealership