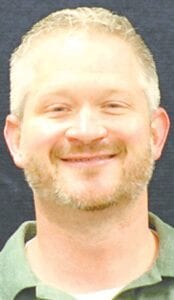 A teacher must be nominated for the award. Nominators are not disclosed, but Sell said one of his current students said he nominated him, and was told he was also nominated by former students and members of the community.

He said he was informed of his nomination, Wednesday, Feb. 24.

“On behalf of the Archbold FFA officer team and chapter, I am pleased to say that we are all beyond proud of Mr. Sell,” said Zoe Castillo, AHS FFA reporter.

“Mr. Sell is a motivated, caring, and encouraging teacher. Our FFA chapter is more than fortunate to have him, and we all appreciate the time and dedication you put into the program and our agricultural studies.”

The 10 Golden Owl finalists receive a plaque plus $500 for their FFA chapters. The winner, who will be announced at the end of April, will get an additional $3,000 for his or her chapter.

“Anytime you can better your chapter, it’s definitely a worthwhile thing,” Sell said.

Sell has taught ag education at AHS for 14 years. Prior to that, he was an agriculture teacher in New Bremen.

He received his Bachelor of Science degree in agriculture education from The Ohio State University. He earned a master’s degree in educational leadership from the University of Dayton.

When he started at Archbold, there were 26 members in the school FFA chapter.

Today, the chapter has grown to 121 members, he said.

Being nominated for the Golden Owl award is flattering, Sell said.

“A lot of people I work with come to mind sooner” than himself as one of the top teachers in the state of Ohio, he said.