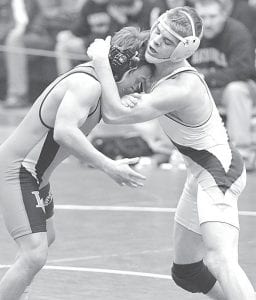 Wauseon, who won the last three league titles, finished second with 187.5. Archbold was half of a point behind at 187 for third.

“They wrestled pretty tough, so we’re gonna have a tough match with them Wednesday. Hopefully we can wrestle them a little bit tougher than we did today in our head-to-head matchups.”

Arce defeated Delta’s Alex Dailey in the championship finals. The senior wrestler grabbed a 7-4 win to earn his first championship. 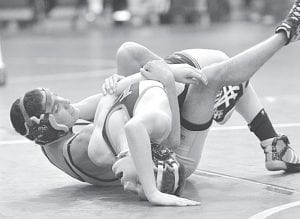 “Someone who has turned the corner that a lot of people don’t know about is Justin,” said Becher. “He wrestled a tough tournament.

“It’s nice for him after not making the varsity lineup until his senior year to get a league championship.”

Day wrestled the premiere match of the evening against Liberty Center’s Zach Niner.

The match was tied at the end of regulation 3-3. After a one-minute overtime and two 30-second overtimes, the score was knotted at 4 going into the final overtime.

Niner chose the down position and only had to escape to win. Day kept Niner down for the full 30 seconds to win his first championship.

“Niner is a hard guy to wrestle. He’s got such a good defensive stance from the neutral position,” said Becher.

“Logan is just gonna have to get in on some attacks next time he wrestles him. You don’t want it coming down to that overtime rideout stuff.”

Archbold-Wauseon is one of the premier wrestling rivalries in northwest Ohio.

The Indians have had the Streaks’ number, winning their last five NWOAL meetings. Archbold’s last win against Wauseon dated back to Dec. 18, 2007.

Someone forgot to tell the 2013 Streaks about Wauseon’s dominance as the Blue and Gold pulled out a hard-fought 37-33 win.

“Wauseon had some guys out with injuries,” said Brian Becher, AHS head coach.

“We matched up pretty well, better than I thought we were gonna match up with them.”

The Indians started the scoring as Jacob Whitcomb won a 19-6 major decision over Ben Eggers (132 pounds), giving them a quick 4-0 lead.

Justice Zimmerman (138 lbs.) got the lead back for AHS with a fall over Cameron Slattman.

Jones was hit with an unsportsmanlike conduct call and a one-point deduction, making the score 28-19.

Justin Arce (106 lbs.) won by forfeit and Zach Meyer (113 lbs.) won by injury default over Jackson Sluder, giving Archbold a lead it would not surrender at 31- 29.

Damian Short (120 lbs.) received another forfeit before Wade Hodges defeated Lukas Rufenacht (126 lbs.) by technical fall to end the match with the score of 37- 33 and giving the Streaks bragging rights.

“I brought the guys together afterwards and I told them the biggest thing that impressed me is that they were humble after they won,” said Becher.

“We weren’t hooting and hollering like it was some huge upset, which was nice to see.”

After the huge win over Wauseon, the Streaks had to get right back to work against a scrappy Swanton team.

Archbold jumped out to a 27-0 lead with pins by Zimmerman,

Parsley won a 12-10 decision and Jesse Rocha received a forfeit.

Swanton cut the difference to 27-21 with four straight wins.

Arce gave Archbold a cushion with a technical fall, but Swanton won the next match to make the score 32- 25.

Short received another forfeit while Rufenacht and Eggers pinned their opponents to make the final score 50-25.

“I knew we’d have somewhat of a letdown coming into the next match,” said Becher. “It’s inevitable after you get a big win.

“Swanton’s got some guys that just wrestle hard. They matched up with us pretty well in different situations.