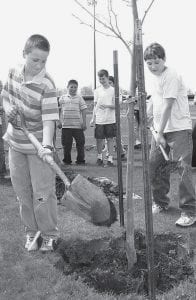 The Village of Archbold held its annual Arbor Day celebration Friday, April 25, at Memorial Park. Fifth graders from Archbold Middle School assisted workers from the Archbold Street Department in planting a tree near the baseball diamonds. This year’s tree is a London Planetree, known for its flaking bark that reveals a lighter color bark underneath. Skylar Gericke, left, and Dylon Jones fill in around the tree. Nathaniel Ballmer, right, puts in another shovel of earth. Archbold has been declared a Tree City, USA, by the National Arbor Day Foundation for 25 years.- photos by David Pugh 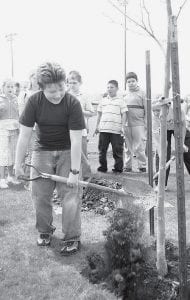