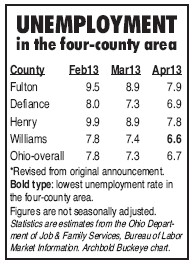 Unemployment in Fulton County in April was down a full percentage point from March, the Ohio Department of Job & Family Services announced last week.

It is the lowest unemployment rate so far in 2013.

In spite of the decline in unemployment, ODJFS said Fulton County has the highest April unemployment rate in the four-county area. Williams County was 6.6%; Defiance County, 6.9%; and Henry County, 7.8%.

Henry County saw the largest drop in unemployment between March and April, when unemployment fell from 8.9% to 7.8%, a drop of 1.1%.

ODJFS set the number of unemployed in Fulton County at 1,700 during April. That compares to 20,100 workers who were employed, giving the county a total workforce of 21,800, the largest in the four-county area.

Across Ohio’s 88 counties, ODJFS estimated that Pike County, in south-central Ohio, had the highest unemployment rate, at 12.1%. Six other counties had rates ranging from 10.2% to 10.9%.

Mercer County had the lowest unemployment, at 4.1%. Five Ohio counties had unemployment of 5% or less during April, ODJFS said.

All county unemployment data is not seasonally adjusted. Comparable figures for the state as a whole and the nation were 6.7% and 7.1%, respectively.

ODJFS estimated that of almost 5.7 million Ohio workers, 5.3 million are employed, while 381,100 are out of a job and seeking work.