April Unemployment At 4.4% In Fulton County 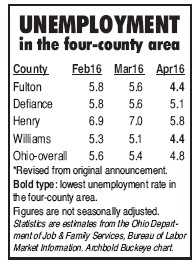 Economists generally consider an unemployment rate of 5% or less to be “full employment.”

Fulton County tied with Williams County for the lowest rate, but Fulton and Henry counties each saw their rates fall 1.2% from March, when the Fulton and Henry County figures were 5.6% and 7.0%, respectively.

Unemployment statewide (not seasonally adjusted) was 4.8%, down six-tenths (.6) of a point from March.

Fulton County unemployment has been 4.9% or lower for 14 of the last 21 months.

Monroe County, in southeastern Ohio on the West Virginia border, was the only of the 88 counties to have double-digit unemployment, at 12.3%.

Jefferson County, in central Ohio on the West Virginia border, had the second-highest rate, at 8.8%.

The lowest unemployment rate was in Mercer County in central Ohio on the Indiana border, at 3%.

Fulton County was in a three-way tie with Williams County and Allen County for 56th-highest rate.

All county unemployment data is not seasonally adjusted. The comparable figures for the state and the nation were 4.8% and 4.7%, respectively.

When seasonal adjustments are applied, the Ohio rate was 5.2%; the U.S. rate was 5%.

ODJFS estimated that during April, there were close to 5.8 million persons in the Ohio labor force, of which 275,700 were out of work.